TO TRY OR NOT TO TRY: ‘Lunatics, Lovers and Poets: Twelve Stories After Cervantes and Shakespeare’

Daniel Hahn and Margarita Valencia (eds.), Lunatics, Lovers and Poets: Twelve Stories After Cervantes and Shakespeare (And Other Stories, 2016)

2016 marked the four hundredth anniversary of one of the most extraordinary years in literary history, as William Shakespeare and Miguel de Cervantes Saavedra – undoubtedly the most celebrated writers in their respective languages – died within a day of each other. (Cervantes’ death, often reported as the 23rd April 1616, was actually the day before; he was buried on the 23rd.) To commemorate this anniversary year, independent publisher And Other Stories has produced this delightfully high-concept volume of twelve stories. Six Anglophone writers contribute stories “after” Cervantes, while six Hispanophone writers provide Shakespearian stories. The authors represent the diversity of the contemporary Anglo- and Hispanophone literary worlds, and may not all be equally familiar names to all readers; however, even before diving into the fictions themselves, the very idea of this collection is a pleasing one.

Lunatics, Lovers and Poets – the title comes from A Midsummer Night’s Dream, but perhaps seems unfortunately clichéd and banal out of context –  is prefaced by a (very slim) introduction by a novelist who stands in both Shakespeare and Cervantes’ shadow, Salman Rushdie. Rushdie suggests that what both authors still have to teach us is that a work of fiction can be several things at once: Hamlet, for example, is a ghost story, a political conspiracy, and a melodrama that ends in a bloodbath, while Don Quixote is simultaneously hilarious and tragic, fantastic and utterly realist. From the way Rushdie describes Quixote, an ungenerous reader might wonder whether he is actually suggesting more about his own Midnight’s Children than Cervantes. Nevertheless, Rushdie’s introduction prompts the question the anthology necessarily struggles with: how to turn fictions as immense and multi-faceted as Quixote and Hamlet, let alone the rest of Shakespeare’s and Cervantes’ oeuvres, into a short story?

The answer is, of course, not to try. Some of the stories here focus on one of the aspects of those great works – the family drama of Hamlet, for example, or Quixote’s self-reflexivity – while others are only tangentially related to the works they are supposedly connected to. The title, suggesting the stories are “after” Cervantes and Shakespeare rather than “based on” or even “interpreting” the writers, means that the anthology can cast its net wide. There is, unsurprisingly, a great breadth of approaches, styles and tales here. 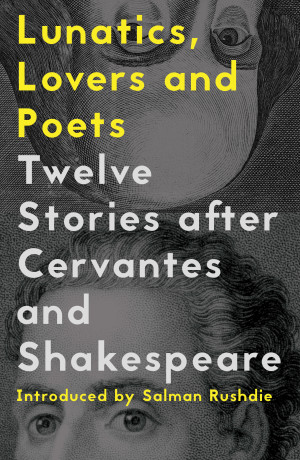 Celebrating and exploring the possibilities inherent to Cervantes and Shakespeare cautions us against thinking that we have ever exhausted their texts, but also suggests the idea of the authors themselves as “texts” to be reworked. On one hand, this means that these writers’ biographies have become treated like works of fiction we know as well as their “other” works, with the second-best bed and the arm lost at Lepanto becoming symbols much like Brutus’ anachronistic cuckoo clock or Quixote’s basin-helmet. Perhaps surprisingly, the stories in this anthology largely steer clear of the authors themselves, in the biographical sense. However, several touch on the other aspect of the fictionalised or mythified authors: the author as a figure in literary history, a father who must be defeated if we are to go on writing in their shadow – or simply a figure whose position can be playfully reinterpreted, if influence is seen less as an anxiety and more as an opportunity of potentiality. Thus, for example, in Soledad Puértolas’ ‘The Secret Life of Shakespearians’ (trans. Rosalind Harvey), the narrative is not itself “Shakespearian”, though it is about what it might mean to call oneself a “Shakespearian”, or to tell a story in a Shakespearian way. Valeria Luiselli’s ‘Shakespeare, New Mexico’ (trans. Christina MacSweeney) approaches similar questions in a very different way; set in a small town dedicated to historical “Wild West” re-enactment, Billy the Kid becomes, literally, a character in Shakespeare, while a “Shakespearian” narrative of intrigue plays out through cod-Shakespearian acting.

Such stories prompt the question of what is “Shakespearian” or “Cervantean.” After all, if these writers were, as Coleridge described Shakespeare, “myriad-minded,” is it not hugely reductive to describe any one setting or plot as “Shakespearian”? (Not that these two authors are the only ones to suffer from such simplification through stereotype: Dickens’, Kafka’s and Austen’s writing covers far more than poverty, bureaucracy and romantic misunderstandings, for example.) These kinds of received ideas are not only linked to the canonised and thus ossified way these authors are viewed, but also, via concepts of canonicity, to ideas of literary nationhood. “Shakespearian” drama is, of course, quintessentially English – as if no other nation has produced literature focussing on brave warrior kings or tragic lovers. But what is “Cervantean” in English literature?  There may be a tradition of Quixote-like deluded comic heroes in European novels – arguably taking in characters as diverse as Northanger Abbey’s Catherine Morland and Ulysses’ Stephen Dedalus – but there is also a tradition, particularly in Spain, of Quixote prompting serious philosophical enquiry, for example in José Ortega y Gasset’s Meditations on Quixote. Meanwhile, as Roberto González Echevarría has argued, there is a thread of “self-aware narration” running through Hispanophone American fiction, including texts by Alejo Carpentier, Gabriel García Marquez and Jorge Luis Borges, that is also traceable to Quixote. What, then, might “Cervantean” mean? These examples show that the answer is often a question of national context and received critical wisdom – that is, the stories we tell ourselves about literary history and nationhood. There is just as much a lineage of “self-aware”, “Cervantean” fiction in western Europe as in Latin America – Tristram Shandy, for example – but in general, critical orthodoxy, tied to concepts of national literature, means that “Cervantean” can stand for different things in different places. There is a Colombian Cervantes for García Marquez, and an English Cervantes for Austen.

One of the intriguing things about Lunatics, Lovers and Poets is its offering of different Shakespeares and Cervanteses, outside these received critical categories. This can mean, in the tradition of postcolonial “writing back,” relocating or reworking their narratives, as in Ben Okri’s west African Don Quixote, or Yuri Herrera’s Mexican Coriolanus. But it also includes more subtly questioning the Foucauldian author-figures’ places within narratives of national literary history. We may have an idea of the “English Cervantes”, for example, but this “English Cervantes” is questioned and reworked by Hisham Mattar’s tale of an Anglo-Egyptian reader of Quixote just after King Farouk is deposed. Juan Gabriel Vásquez’s ‘The Dogs of War’ (trans. Anne McLean), meanwhile, featuring a scholar who has dedicated his life to rereading Shakespeare, asks what “Shakespeare” comes to mean in a post-FARC Colombia. Translation is brought to the forefront, as not only the texts, but also the concepts of the author-figures themselves are reread in different contexts and languages.

Such “rereading in different languages” is even true within the terms of this anthology itself as a textual artefact: the English edition contains translations from Spanish of six stories, by six different translators, while there is a parallel Spanish edition translating the six Anglophone authors (Lunáticos, Amantes y Poetas: Doce Historias Inspiradas en Shakespeare y Cervantes, Galaxia Gutenberg). Recognition of translation is clearly key to the aims of the project: in a Venuti-disproving move, the anthology’s six translators (Lisa Dillman, Samantha Schnee and Frank Wynne, alongside the aforementioned three) are given biographies as detailed and prominent as its authors.  Like Don Quixote, the collection makes explicit the multiple levels of removal that always comprise reading. Reading is always an experience of translation, and an English translation of a Spanish fiction reflecting on reading Shakespeare via the constructed myth of “Shakespeare”, in Spain, forces us to acknowledge this.

It is also important to remember, however, that in Cervantes and Shakespeare, the greatest profundity is rarely completely separate from laughter. For example, many of Shakespeare’s plays – including Hamlet – contain some truly filthy double entendres. This connection is perhaps most clearly seen here in Rhidian Brook’s ‘The Anthology Massacre’, a brilliantly funny tale of a self-aggrandising, fantasist author – a Don Quixote figure – whose self-proclaimed masterwork is Rocinante, an extravagantly overlong rewrite of Quixote from the point of view of the horse. Although Don Keyworth, unlike Quixote, really does destroy his opponents, one of these opponents is named as that “god-bothering token Welshman, Rhidian Brook,” who has just submitted a story to be included in an anthology of twelve stories commemorating the four hundredth anniversary of Cervantes’ death… The story reworks Quixote both in its comic but terrifying central figure, and its self-reflexivity – what Borges called the “partial magic” of Quixote, where the characters, seemingly aware of their fictionality, pass judgement on the works of the very author who created them. The story is darkly funny, gives much room for discussion on the nature of textuality, and invokes the vertigo that Borges describes when realising that if characters in a fiction can pass judgement on us, perhaps we too are no less fictional than them – just as “Shakespeare” and “Cervantes” become (re-)fictionalised elsewhere in the collection.

Two more of the most immediate yet complex stories in Lunatics, Lovers and Poets are two versions of Cervantes’ ‘The Glass Graduate’ recentred on young women’s emergent, or unspoken, sexuality. ‘The Glass Graduate’ is one of Cervantes’ more ambiguous tales, focussing on a young man who comes to believe he is entirely made of glass. As Deborah Levy’s ‘The Glass Woman’ points out, there are several historical cases of such a belief, among them King Charles VI of France. Levy’s central figure, the Bavarian princess Alexandra Amelie [sic], actually perceives herself not to be made of glass, but to have swallowed a glass piano. The story imagines the curious relationship between the princess and her therapist. Nell Leyshon’s ‘Glass’, meanwhile, is a wonderfully abstract fairytale that arguably owes as much to Plath’s The Bell Jar as Cervantes. Both stories are – if the reader will forgive the image – as familiar yet unsettling as the sound of a finger being run over a wetted glass.

The anthology stands, above all, as testament to the translatability of Cervantes’ and Shakespeare’s writing. A “specific significance” inherent in a text, wrote Walter Benjamin is his ‘Task of the Translator’ (trans. Harry Zohn), “manifests itself in its translatability.” This does not mean that translation of a text demonstrates the significance of that text, but that the significance of a text is shown in its translatability, its potential for translation. This potential for translation – the possibility of one text being modified and producing another, and another – is a central theme of Don Quixote, from the claim that the novel is transcribed from a translation of an Arabic manuscript, to Don Quixote himself, in Part II, encountering people who have read the first part of his adventures. The latter means that the text turns in on itself and translates itself, as well as the spurious “sequel” by Avellaneda; one of the first reworkings of Don Quixote is Don Quixote itself. Quixote is – amongst other things – a novel about the endless possibility for translation, for more stories, for more aspects of a text to be revealed and for each of these aspects to lead to another text, itself containing multiple possibilities for translation. It is therefore the case that the twelve stories contained in Lunatics, Lovers and Poets are completely different from each other not only because of the breadth of authors and literary styles included, but because such difference is already there, as potential, in Cervantes and Shakespeare.

This collection is occasionally more interesting in concept than in execution, and some of the more satisfying stories are those that treat Shakespearian or Cervantean themes – whatever those might mean – most loosely. Nevertheless, this is an enjoyable anthology of stories in its own right, and is also valuable not for showing the multiplicity of possibilities available in Shakespeare and Cervantes – but for showing the inexhaustibility of their texts. There is always, as the publisher’s name suggests, another story waiting to be read.