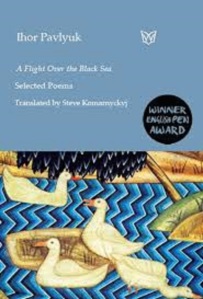 Ukraine looms over the map of East Europe like a dragon, its head nuzzling Poland and its truncated tail fading out at the edge of the Black Sea. Yet this country, whose black soil has lured invaders since Genghis Khan pitched his tent in the Steppe, remains invisible. Ukrainian literature is the equal of that of its Slavic neighbours, but is unknown in the West. The Ukrainian authors we know, such as Gogol (Ukrainian Hohol) and arguably Chekhov, wrote in Russian. The invisibility of the country’s literature is linked to its status as a Russian colony. The Tsarist and Soviet regimes repeatedly tried to strangle the Ukrainian language. The Ems Ukaz (1876) is the most notorious attempt to legislate the language out of existence. This secret decree, signed by Alexander II, prohibited publishing anything in Ukrainian except for reprinting old documents. Ukrainians were serfs for much of their history. Taras Shevchenko (1814-1861) may be the only nineteenth century European national poet ever to have been owned by another human being.

The attempts by Ukrainians to appeal to the international community for help to address this oppression have gone unheard. When Mykhailo Drahomanov tried to present a paper covering the suppression of Ukrainian literature at the European Literary Conference in Paris in 1878. The item was not included on the agenda because the assembled authors were concerned about protecting copyright within Russia. Pragmatism and self-interest triumphed over principle. Russia has colonised the imagination of the West and effectively amputated Ukraine from our collective cultural heritage. However, on two occasions in the past twenty years, Ukrainians have taken to the streets to defend democracy. The country’s presence and its turbulent, anarchic character have begun to register in the West. Its cultural treasures are glittering before us like the riches of Aladdin’s cave. What are we about to discover?

Rory Finnin, writing in the Huffington Post, describes Ukrainian literature as being created by “rebels and risk takers”. He lists several authors who could have pursued literary careers in other languages but chose to write in Ukrainian, the language of the colonised nation. Writing in Ukrainian was, he says, “Largely to defy convention and imperial fashion, often at personal cost; it was to refuse to conform to imperial majorities, often at the expense of wider renown.” He cites several authors who are yet to be discovered in the West. These include Olha Kobylian’ska’s (1863-1942), the ground-breaking Modernist writer and feminist pioneer from Bukovyna, a region in what is today western Ukraine. Her novel Valse Mélancolique touches on many themes subsequently explored by Virginia Woolf. However, as Finnin notes, it predates Virginia Woolf’s A Room of One’s Own by over three decades. Classic Ukrainian authors all gave literary expression to ways of being excluded by most other literatures. Taras Shevchenko’s poetry combines fidelity to vernacular language with remarkable poetic craft. Pavlo Tychyna’s Solar Clarinets (1919) combines an ecstatic pantheism with a poetic innovation and scope reminiscent of T. S. Eliot’s The Wasteland. These poets give voice to the colonised peoples of Europe.

The revolutions sweeping the country have resulted in a wave of experimentation in modern Ukrainian literature. The Russian translator of Ukrainian literature, Elena Marinicheva, when comparing contemporary Ukrainian and Russian literatures, argues that the former has “advanced further”. The poet Liubov Iakymchuk’s lament for the carnage caused by Russia in her native region is one of many ground-breaking recent works. Oleh Poliakov satirises the beauty industry in The Slaves and the Friends of Lady Vekla. The novel has the surface dazzle of Martin Amis, and a lot of belly laughs, but touches on something deeper. Oleh Shynkarenko’s novel Kaharlyk began as a series of dispatches from an alternative reality on Facebook. The novel is described by Andrey Kurkov as a series of beautifully crafted puzzles. The protagonist goes on a journey, as fantastic as Gulliver’s trip to the land of the talking horses.

Ukrainian literature is slowly beginning to trickle into the West. In 2013 I won an English PEN award for my translations of Ihor Pavlyuk’s work (A Flight Over the Black Sea, Waterloo Press, 2014). The book was subsequently voted the reader’s favourite on the PEN World Bookshelf. I also work as the co-director of Kalyna Language Press Limited. We have published two novels translated from Ukrainian into English. Raven’s Way is a tale from Ukraine’s independence war set in the twenties, which combines Cossacks, Amazons and Witches with graphic battle scenes. Episodic Memory is a beautifully crafted fictionalised memoir of a Steppe childhood. The book reads as if it were written in three dimensional ink. But these books are just the start, like the sighting of the first migratory birds returning. We are only at the beginning of a long process of cultural restitution and the emergence of Ukraine in the western imagination.

Kalyna Language Press is currently running a kickstarter to raise funds for the translation of Oleh Shynkarenko’s groundbreaking novel “Kaharlyk” by 20 March. To read more and find out how you could help Ukraine’s literary voice be heard and get a great book in return please click here.