DAVID MOFFAT was born in Glasgow and is a graduate of the Glasgow School of Art. He has written a biography of his primary school years in Glasgow’s east end which continues to supply a rich source of material for his current poetry and art work. 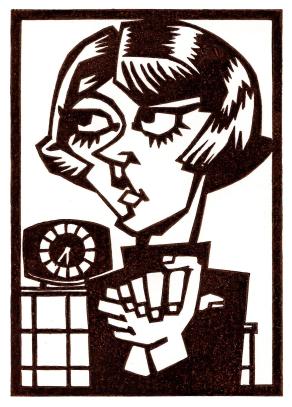 She speculates on why he’s late,
it’s not a date as such and though
she likes him very much she isn’t sure
he feels the same. She loves his name-
Murdoch has the solid sound
of both feet on the ground.

Her mum and dad are at the pictures
somewhere in the town, the latter
with a frown and moan, he wanted
Guns of Navarone or something a bit gory,
he’s getting West Side Story.

What’s keeping him? Should she be worried?
She‘s eyed the mantel clock for hours
wondering if he’ll bring her flowers. 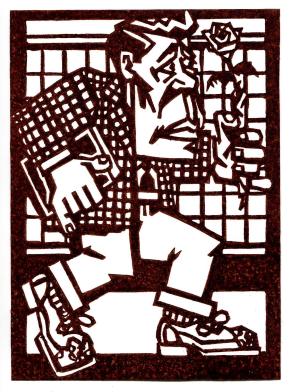 She said that he could call
anytime at all, so why is Murdoch
(six foot-several inches tall)
as nervous as the last green bottle
standing on the wall? Anxious at the bell,
a tremble takes his finger, prior to the press
that travels to his thumping chest
(what if her answer isn’t yes?)
He’s worn his best, the jacket with the check
less loud than all the rest
and turn-up flannels with two creases
ironed to impress but will he pass her test?
His problem is, though like an idol
from a matinee with hair that’s black
and satiny with Brilliantine, he’s shy.
That’s why he hasn’t got the gabby gift,
the confidence to shift a conversation
with a Miss he finds attractive from
the passive to the active and kiss her.
Suddenly this dryness grabs his throat
like he’s chewed a fox-fur coat
and he fears the boxed Black Magic
might have come to heated harm
by being carried underneath
his fretting, sweating arm.

And so he leaves his song unsung,
leaves her bell unrung to ghost
back down the gloomy close
in tip-toe, tip-toe silence.