I AM A ROHINGYA: POETRY FROM THE CAMPS AND BEYOND 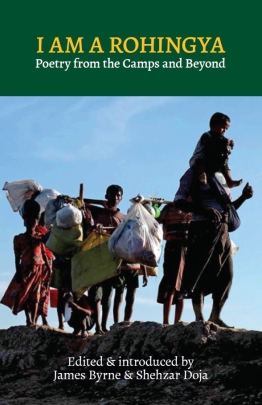 I am a Rohingya: Poetry from the Camps and Beyond. Edited by James Byrne and Shehzar Doja (Arc Publications, 2019)

What lives in the silences between the muezzin’s recitation of the Koran?

On their first day of creative writing workshops at Cox’s Bazaar camps in April 2019, this was one of the questions Rohingya refugees were asked.

I Am a Rohingya is the prevailing, reverberating response. It is an anthology of poetry that documents the persecution and trauma of the Rohingya people – and it is one that crucially centres their voices. These poems expose the truth of horrors occurring in Myanmar, of ethnic cleansing and genocide, of families being separated, of statelessness. And yet, ‘expose’ is absolutely the wrong word. These atrocities have been reported, the statistical data widely available, and assistance is being, and has been, requested for now over two years. And, before the latest exodus in August 2017, Rohingya people faced targeted violence in Myanmar and waves of displacement for decades. Editor James Byrne acknowledges this ongoing violence: “For over two hundred years, the Rohingya have been forcibly moved out of their homes in Rakhine and the present exodus … looks set to be prolonged with no real or safe plans for repatriation.” This rings devastatingly true when, at the end of last year, at The Hague (December 2019), Myanmar leader, [and Nobel laureate] Aung San Suu Kyi, defended the obvious genocidal crimes of the Tatmadaw, Burma’s army. This anthology does not mark the first time we have been called to action and it will not be the last.

However, the force in this work lies in giving power to Rohingya refugees, who lay bare these tragedies while also representing their vibrant, rich culture, intersecting these narratives with hope and resilience. Editor Shehzar Doja writes in his introduction, “The simple truth is that the ethnic Rohingya population, which has existed for several centuries, was being systemically purged of its identity including, essentially, its culture, in a manner reminiscent of great ethnic purges of the past.” I Am a Rohingya is a call to action that has refused to broadly define Rohingya refugees by tragedy only and works to preserve an identity that exists deeply beyond a state of emergency. While the work within is often explicitly about violence and systematic discrimination, this collection aims also to bring forward a strong musicality – crossings of song and poetry – and echo outward from an oral tradition of folk song, of textured stories that accrue and create their own timelines and geographies. All these factors intertwine into vigorous activism.

I continuously come back to that question asked of workshop participants, and it has framed how I read this anthology. What lives in the silences between the muezzin’s call? The United Nations Office for the Coordination of Humanitarian Affairs (OCHA) has reported that as of March 2019, over 900,000 Rohingya refugees – a number that Mayyu Ali, in the book’s afterword, estimates is actually over one million – have fled to Bangladesh since August 2017. More than 40 percent of those reaching Bangladesh are under age 12. As I write this, and as those of us who are not Rohingya read this anthology as observers bearing witness to these poems, we must, in turn, interrogate our own silences.

James Byrne and Shehzar Doja travelled to Bangladesh with the aim of setting up the first ever creative writing workshops for the refugees at the Cox’s Bazaar: “They each have a story to tell about the horrific scenes they have experienced,” Byrne writes in his introduction. The 2-day creative writing workshops may have been a point of access. In my experience, workshops can provide vocabulary for one’s intuition, or one’s already practiced sense of making, as well as a language of expression.The Cox’s Bazaar workshops focused on discussions of literatures by T.S. Eliot to Mina Loy, on imagery, metaphor and repetition, and on various creative exercises like collage and ekphrasis. Although imagery, metaphor and repetition are undeniable in the anthology’s works, I do question the methodology of transposing a Western/European-centric canon and style of craft learning to these workshops. However, as the Rohingya have been denied the basic right of education, I also can’t negate the value of this learning, especially seeing a Rohingya poetics amplified in this publication, the culmination of these workshops.

I Am a Rohingya is a work that implores us to pay attention, to combat the ongoing dehumanisation of an entire people. And throughout the anthology, there are reminders that for us too, seeing the Rohingya solely as victims plays into that same hand. A striking, long poem by one of the few women in the anthology, Yasmin Ullah, ends with the desire to be truly seen:

It’s not enough to hope for
the generosity of helping hands
or consoling voices,
I want the ears of love,
the heart of justice
that believes
that as much as we are victims
there is potential in our social contribution.
There is more to being Rohingya than exodus.

So, please,
look at me,
my people, us,
through the lens
you reserve for someone
special,
wholesome, human –
not so different
from you

Although the poem asks its readers to look at Ullah, to look at the community, in its entirety, it glimmers with a repetition that asserts Ullah’s existence long before this request. Each segment of the poem beforehand echoes with the phrase, “I was born…” It is meaningful and important to acknowledge that although many of the poems in this anthology appear to be written for a “you” – an audience that is separate from the Rohingya people – these poems, too, assert a selfhood rooted beyond our gaze. They narrate a lived experience with intense lyricism. In ‘Give Me a Chance to Restart This Life,’ Ro Pacifist also addresses us as an audience directly, weaving together a moment in which we must examine ourselves as witnesses with remarkable imagery stemming from the individuality of his life:

My oxygen
not fresh like yours;
arriving from years of bloodshed.

My skin,
not blue like yours;
greyness of the smoky mountain.

Other poems extend these questions, acknowledging an onlooker that does not acknowledge their humanity in turn: ‘Tell me why my world is so different from others,’ ‘Am I not the same as you?’

I sent a message once, it reached the sky,
Collided there, echoing, unanswered

(‘Being Rohingya’ by Ro Anamul Hasan).

What lives in the silences …

But just as Ullah asserts her existence before detecting our gaze, the poems in I Am a Rohingya reinforce a sense of community; they are filled with specific illustrations, with images and yearnings that build connections between the verse and writers throughout. For example, many navigate land, reflecting on how landscape and motherland have been altered, have transitioned into a place ‘too wilted to show its face’ (“About Those Born into this Place” by Yar Tin) concretely, imaginatively, and/or emotionally. In these pieces, the remarkable imagery and tones are undeniably sorrowful; this experience is born from clearly expressed nostalgia that navigates the junction of home, of place, and of forced displacement.

I keep missing a place I barely know

(‘The Unfamiliar Home’ by Yasmin Ullah).

The poetic landscapes respond to one another and illustrate a fiercely clear image of Arakan in all possible ways: what it once was, what it could have been, what it might never be.

In Cox’s Bazaar, no trees, no home, no stream –
not like our golden Arakan.

In our golden land, the trees give shade

And, most cuttingly: what it is or has become.

What do you feel
when you see your loved ones
in blood river?

My Arakan torn
to pieces.

(‘My Arakan’ by Maung Hla Shwe)

There is little silence from the poets in I Am Rohingya, unless punctuated and deliberate. Thus, as witnesses, we must listen. I Am a Rohingya is not easy to read. And, it is not easy to write about. But it is important to pay attention, and more than that, it is important to manifest that attention into action. Otherwise, we will have to confront our inaction, as we must confront Maroon Moon’s glaring question: how?

How do you turn your back on tears?
How do you look away from the innocent?

As Doja writes in his introduction, this anthology is preserving an identity. It is not enough to fight state-sponsored violence by only stop gapping wounds and ignoring its legacy. We must ask ourselves how we can preserve the Rohingya culture, so that survival isn’t stripped of heritage and tradition. Today, I am writing about poetry that, at times, aims its words explicitly to readers outside of the Rohingya community. Today, I am the ‘you’ in the poem. I Am a Rohingya is a space that cultivates this dialogue, a space on which we are called to act, because that is what is necessary. But, it is also an open door that invites more collections of its kind, additions to a Rohingya poetics where the ‘you’ in the poem might be me, but it also might be more ambiguous: perhaps an object, a lover, a created self, or others within the Rohingya community: a limitless possibility – something that I understand is a luxury we often take for granted. There is lyricism and sensuality in each poem here, and this anthology hints toward mystery and wonder, both made stronger by its politics, such as the final poem, “Night-blooming Jasmin’ by Ro Mehrooz:

O moon uncle, moon uncle, please hear me.
Come to the wedding wearing white.
For you, the buds of the night-blooming jasmine wait.