Three Scottish (Kathrine Sowerby, William Letford, MacGillivray) and one Welsh poet (Llyr Gwyn Lewis) travelled to Riga in late 2017 to work on translations with Latvian poets Inga Pizāne, Aivars Eduards, Katrīna Rudzīte, and Henriks Eliass Zēgners. The latter then travelled back to Scotland in 2018 to perform with the UK-based poets. Some of the results of these intensive workshops are published in this series. The events were organised by Ryan van Winkle and Inga Vareva, and generously supported by the Scottish Poetry Library, British Council and Latvian Literature. 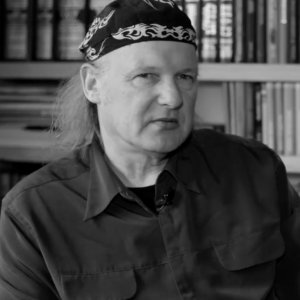 EDUARDS AIVARS (real name Aivars Eipurs) is a poet, short prose writer, essayist, and a long-time literary mentor and consultant of young and aspiring poets. His fields of study and research include philology and group psychotherapy, he has worked as a teacher, press secretary, editor and publicist, and also has been providing counselling and therapy for rehabilitating addicts and alcoholics. He speaks Russian, English, French, Spanish and Italian languages, and is an active member of the Latvian Writers’ Union. His literary works have been published frequently since 1985 and are regularly nominated and awarded important literary awards and prizes. His poems have been translated into English, Ukrainian, Hungarian, Swedish, etc. Eduards Aivars is also known as the compiler of the well-received anthology One Poem/ Viens dzejolis (2013), comprising previously unpublished works of 78 poets. Having published nine collections of poetry, and several works of short prose, Eipurs also collaborates with others, and his contribution to culture and literature reaches beyond his own writing.

Click here for a PDF version of the dual-language poems: Poems_from_Translation_Workshop_Riga_2017 (3)