RULES AND IRREALIS: ‘THE ART OF NAMING’ BY MICHAEL OHL

Since the mid-eighteenth century the construction of scientific names of plant and animal species have obeyed strict rules. For instance, they must be bipartite and latinised. ‘The honeybee, for example, was known to some authors into the seventeenth century as Apis pubescens, thorace subgriseo, abdomine fusco, pedibus posticis glabris utrinque margine ciliatis.’ Literally, the ‘furry bee, grayish thorax, brownish abdomen, back legs smooth with hair on both sides’. This was a wordy descriptor rather than something we would recognise as a name. As Michael Ohl explains in his book The Art of Naming, first published in 2015 and now translated from German by Elisabeth Lauffer, Carl Linnaeus sought to put an end to this taxonomical mess. He called the honeybee Apis mellifera: the bee that carries honey. Linnaeus then realised that bees don’t carry honey, they make it. So Apis mellifera became Apis mellifica in Linnaeus’ 1761 work on the Swedish fauna. However, and this is a point Ohl belabours throughout, the first published species name, from the time of Linnaeus’ 1758 Systema Naturae, becomes the eternally valid and scientifically accepted one. Therefore the scientific name for the honeybee remains, to this day, Apis mellifera. This juxtaposition of names versus meanings, nomenclature versus taxonomy is central to The Art of Naming. Ohl introduces biophilosophy – the study of the ethical, metaphysical and epistemological aspects of biology – in order to examine how we use names to label entitites in the world around us. 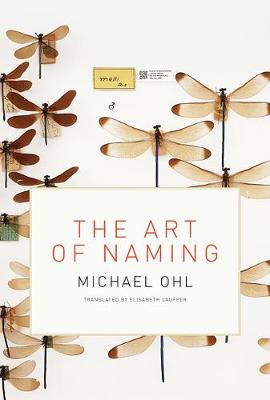 As a cancer researcher, I work with mice (Mus musculus) on a daily basis but book reviews are not my usual métier. I approached this book with a healthy dose of scepticism, as scientists are wont to do. Consequently, I found myself arguing with Ohl, especially in the beginning, questioning sweeping statements such as the following from the prologue: ‘It is through its name that the individual is bestowed with meaning, and it is through its naming that it becomes part of our perception of nature’. My marginal notes read, ‘disagree’ and ‘what’s in a name?’ Despite being a biologist, I don’t know everything about the natural world and can’t enumerate the times I’ve encountered beautiful (and therefore meaningful?) flora and fauna with no idea of species’ names. We also know, and I agree with Shakespeare on this, that a rose by any other name would smell as sweet (The Art of Naming completely ignores botany.) I, perhaps naïvely, thought that it’s not necessary to know the name of an entity to perceive or ascribe meaning to it . Though of course I concede that it helps to have a name for something when communicating about it. Suffice it to say, Ohl and I got off to a rocky start.

Why do we not find out until chapter three (of nine) what a species is and that, incidentally, there is still considerable debate about its definitions, both biological and philosophical? This seems to me a central point to tackle before attempting to name any of them. It is also only now that we’re introduced to names as linguistic elements, proper names and appellatives, which would have helped in understanding the prologue. Given that taxonomists – Ohl himself is a taxonomist-entomologist at the Natural History Museum in Berlin – are organised, often almost pathologically so, this illogical structure surprised me. Furthermore, Ohl vacillates between the importance of naming and categorising, the ‘eternal fame ’ that accompanies naming a new species, and the usefulness, or uselessness, of this activity in the wider world. After all, a rose is a rose is a rose and ‘a mouse is a mouse, whether a striped field mouse or a shrew.’

If this is true then what is the art of naming and why is it important? It turns out ‘the actual act of naming is not governed by any objective set of rules ’, but ‘that the art of taxonomy is the ability to discern between intra- and interspecific variability.’ So the ‘art’ then is actually a science combined with extensive knowledge of what is already known about the natural world. Scientists are concerned with ‘how clear they can make themselves through language.’ Here I scribbled ‘agreed!’ in the margin. From a scientific point of view, animal and plant species need unique, unambiguous names for communication purposes. Given that at the moment we know and have named about 1.5 million species and that there are at least as many still to be discovered, naming them all has and will continue to require some creativity (Quite understandably, Ohl doesn’t mention microbiological taxonomy. Bacteria reproduce asexually and share genetic material in all ways imaginable so that defining a species is even more difficult than for multicellular organisms).

It is also in chapter three that the lay reader is introduced to language philosophy and ontology more broadly. Only now, with more explanations and definitions, could I start to understand and therefore forgive Ohl for his initial sweeping statements, which assumed thorough prior knowledge. There has been long-standing debate in the biophilosophy field as to whether species should be classed as philosophical ‘kinds’ / ‘classes’ or ‘individuals’. Nowadays, the latter view is more widely held. Michael T. Ghiselin, an early proponent of this argument, wrote in a 1974 paper entitled ‘A Radical Solution to the Species Problem’ that ‘species are to evolutionary theory as firms are to economic theory.’ He was, I believe rightly, highlighting the fact that if species were viewed as classes this would, by definition, imply an immutability precluding species’ ability to adapt and evolve. Philosophically speaking, individuals, on the other hand, can and do change. This debate is also important in the context of naming because language philosophy distinguishes between ‘proper names’ – assigned to individuals such as Apis mellifera – and ‘appellatives’ – assigned to groups of entities such as all ‘bees’ lumped together.

Ohl concedes that ‘most biologists don’t often engage in philosophical discussions such as this one.’ From personal experience this is certainly true though by no means a desirable state of affairs. We biologists are pursuing, or in possession of, a ‘doctorate of philosophy’. However, instead of learning how to think, or why, historically and philosophically, we as scientists think the way we do today, PhD students are driven to faster, sexier science. Maybe it’s time to slow down and take programmes such as the ‘R3 Graduate Science Initiative’ at Johns Hopkins University, in which students ‘learn to apply rigour to their design and conduct of experiments; view their work through the lens of social responsibility; and to think critically, communicate better, and thus improve reproducibility’, more seriously.

Clear communication is also important to Ohl. He makes a strong case that, despite most scientific names not reaching the public sphere, it is the scientists’ responsibility to communicate clearly to a lay audience. He achieves this in The Art of Naming by putting biodiversity, together with in situ photographs of specimens shot on a smartphone (Samsung Galaxy S4), in the spotlight. Ohl has been involved in raising public awareness for taxonomy at the Natural History Museum in Berlin. In 2014 he described a new wasp species that received its name through a visitor poll: Ampulex dementor, the ‘soul-sucking’ wasp because it ‘paralyses its cockroach prey.’ Ohl is otherwise quite conservative in his naming, which distinguishes him from the colourful, not to say eccentric, characters that form the cornerstones of the book.

In the stories about the men who did the naming and the bizarre examples that Ohl digs up, The Art of Naming shines. For instance, did you know that ‘in 1876, another struggle [in addition to the Great Sioux War] was raging across the American West and the pages of scientific journals? ’ Neither did I. During the so-called ‘Bone Wars, the palaeontologists Edward Drinker Cope and Othniel Charles Marsh were sworn enemies. Between the two of them they described ‘more than 130 fossil vertebrate species’, including famous dinosaurs such as Triceratops and Elasmosaurus. They were constantly outdoing one another, ridiculing and insulting each other. Marsh called one of the marine reptiles he discovered Mosasaurus copeanus. Cope countered by requesting in his will that his body become the ‘type specimen’ or ‘holotype’ of the species Homo sapiens. Holotypes are the name bearers of a species and act as a reference for all other specimens of that species. This is an extreme example but it does highlight the anthropocentrism of taxonomy. Linnaeus himself dubbed us the wise people in the tenth edition of his Systema Naturae. He also called the students he sent on expeditions to gather new specimens his ‘apostles’. Linnaeus would be happy to know that in 1959 he was posthumously appointed the lectotype – a quasi-holotype assigned after the original description of a species – of Homo sapiens. This was only possible because there had not been a scientific publication to allocate this honour to Cope, partly because ‘his bones were highly decalcified, which suggested the onset of syphilis.’ In taxonomy, perhaps more than in any other scientific branch, you publish or perish.

As the title promises, The Art of Naming is also about language and wordplay, appealing to etymologists and pun-lovers alike. ‘Sex is a popular topic, even in taxonomy,’ writes Ohl but I will leave the reader to peruse this ‘naughty nomenclature’ in her own time. In an interview Ohl admits to having struggled with writing such a long German text, which sometimes becomes evident in convoluted sentence structures. What’s more, many examples are drawn from the German-speaking world. Having grown up in Vienna speaking German, I didn’t mind this at all. There were a few cases in particular that tickled me. You have to know that Austrians poke fun at Germans’ accents and vice versa. The Austrian couple Ulrike and Horst Aspöck, ‘world experts in snakeflies and other lacewings’, have described and published several species names rooted in Viennese dialect. They named one of the snakeflies that had been especially difficult to classify Parvoraphidia aphaphlyxte. This looks like it could have classical origins, but to me sounds like ‘a verflixte’, which Lauffer translates into ‘a damned or tricky thing.’ I can just hear my grandmother shooing away ‘a verflixte Fliegn’ from her impeccable Schnitzel.

In the last chapter of the book called ‘Naming Nothing’, Ohl discusses the application of the nomenclature rules to imaginary entities. This is the realm of cryptozoology or ‘empty names’ according to language philosophers. One example is that of the ‘nasobame’, which the German poet Christian Morgenstern invented in his eponymous 1905 poem. The species was officially named Nasobema lyricum in a 1957 book, translated in 1967 as The Snouters: Form and Life of the Rhinogrades (The Natural History Press).

When I first reached the end of the book it seemed to me there was a gap that needed filling. Ohl began by claiming that individuals, species in this case, attain meaning through their names. He concluded by saying that non-existent entities could also have proper names, which makes sense because we know simply from reading poetry and prose that places and characters conceived in an author’s mind have names. To me, unversed in categorical ontology, I thought there must also be the opposite of an empty name, something ‘real’ that cannot be named (as opposed to something ‘real’ that just hasn’t been discovered and described yet). I discussed this with friends who have more background knowledge of language and philosophy. The closest we could find are the grammatical ‘irrealis’ moods, which include constructions such as the subjunctive and conditional. Then it struck me that my quest to find a name for as yet unnamed realities, in itself, is proof that even if we don’t have a name for something, the empty argument leaves us with a placeholder structured exactly like a name.