It sounds a bit pretentious these days but I still do believe that medicine is a calling rather than a profession or a job. In order to be a good neurologist you need to be a ‘noticer’ as well as a listener. When I began my training the two books I was recommended by my teacher William Gooddy were the Complete Works of Sherlock Holmes and À la recherche du temps perdu by Marcel Proust. Neurologists need to keep up with the advances in their speciality by reading scientific papers and textbooks crammed with factual knowledge. Oliver Sacks’ books were the stimulus for many young people to pursue careers in neurology and psychiatry but the many patients with the  ‘deficits’ that he drew attention to also became grateful empowered fans. 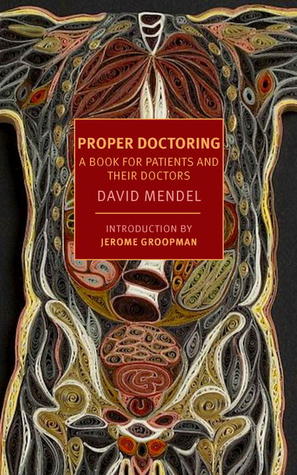 My first choice is Proper Doctoring by David Mendel which I first read as a young Consultant at the National Hospital, Queen Square, London in the 1980s. Magnetic resonance imaging has revolutionised neurology since then and made accurate diagnosis of strokes, tumours and multiple sclerosis much easier. I was relieved to find that on re-reading Mendel’s wisdom it seemed even more relevant now than it was then in my quest to become a better practitioner. Doctors still preserve some mystique within society because of what they know. This book provides insight for lay people on how doctors go about their business of restoring health.

My second choice is Naked Lunch, The Restored Text by William.S.Burroughs. Doc Benway, the antithesis of good doctoring, is the best known of all the doctors that appear in Burroughs’ writing. Burroughs had an ambiguous relationship with the medical profession. As a young man he toyed with a profession in medical psychology and tried on several occasions to collaborate with scientists. When I first read Naked Lunch in the late sixties Benway seemed like a caricature of some of my own surgical teachers. Reading it now I can see that Burroughs’ prescience allowed him to predict the iniquities of the health care business, the duplicity of governments in allowing the Pharmaceutical industry to control new drug development and the red tape and bean counting that stifle creativity within universities. On first reading I didn’t know whether to laugh or vomit; now I acknowledge Burroughs as a prophet and an important invisible mentor for my own research.

2017 is the bicentenary of James Parkinson’s Essay on the Shaking Palsy, which I have re-read. His concise clinical description allows anyone to diagnose the syndrome that now bears his name in the street and reminds us that nineteenth century medical descriptions were as readable as novels. My third choice is Jonathan Taylor’s book Take Me Home: Parkinson’s, My Father, Myself. The author’s father was diagnosed with Parkinson’s disease in 1988 and the slowness, stiffness and trembling that characterise the illness were complicated by an associated dementia. A man who as a schoolmaster had been able to recite large segments of William Shakespeare by heart started to see goblins and mistake his son for Humphrey Bogart and on other occasions a hated former colleague. There are many good pathographies about living with Parkinson’s disease but none are as informative as this beautifully written insight into the malady by a son forced into a role of carer. After his father’s death Taylor finds salvation by setting out on a quest to find out who his ‘phantom father really was. His father John’s life had been shrouded in mystery long before Parkinson’s disease wiped away his memory but by some impressive sleuthing Taylor is able to reveal his father’s fractured past. He also did something which I always recommend my research fellows working at the Brain Bank to do which is to read his father’s clinical case notes backwards to discover the precise moment he was last well and then travel forwards again to understand the medical milestones in the course of this brutal illness.