EIBF 2017: An Interview with Ever Dundas

This is one of a number of pieces covering events at the Edinburgh International Book Festival, which runs from 12th–28th August 2017 at Charlotte Square Gardens and George Street, Edinburgh.
The event with Ever Dundas and Hwang Sok-yong takes place on 16th August 2017.

An Interview with Ever Dundas about her debut novel Goblin (Freight Books, 2017)

Ever Dundas was born in Edinburgh. A writer of short stories and dark fairy tales, her work has been published in Gutter and New Writing Scotland. As a book reviewer and interviewer, she has written for The Skinny and the Scottish Book Trust. In 2011, she gained a Creative Writing Masters from Edinburgh Napier University, and holds a degree in Psychology and Sociology from Queen Margaret University. Goblin (Freight, 2017) is her first novel. Funded through a grant from Creative Scotland, she is currently at work on her second novel, HellSans, a science fiction thriller.

Lisa Guidarini: Goblin is your debut published novel, but had you experimented with long-form fiction previously? Are you the sort of writer who has partially completed drafts of novels sitting around?

Ever Dundas: No, Goblin is my first novel. Before that, I had only written short stories – the longest being just over 5,000 words. I wanted to write a novel since I was seven years old, but the task seemed too big. When I signed up for the Napier Creative Writing MA, my main aim was to finally do it.

The pet massacre was the starting point, the incident around which the story would be constructed, and Goblin came straight after – she was the way in, the person through which this incident would be understood. She’s the title character and everything about the book (the way it’s written, the plot) revolves around her, so she was a firm foundation early on.

The pet massacre was a historical event. How did you come across it, and what moved you to set a novel around it? 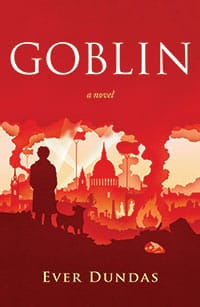 I came across the WWII London pet massacre when I went to see the Poliakoff film Glorious 39. I thought Poliakoff was using it as a fictional device, a foreshadowing of the Holocaust, but it had actually happened. Around 400,000 pets were killed within a week after war was declared. There was no government directive, there’d been no bombing, there was no mass panic. It shocked me that pets – living creatures – were so disposable.

I knew immediately my first novel would be based around this event. I was already interested in animal welfare, rights, and the relationship between humans and animals, and I’ve always had an interest in WWII.

I didn’t set out to write a historical novel, it just happened to be (partly) set during WWII. It was important to me that more people know about this event. The UK considers itself a nation of animal lovers, and we have an overly romantic view of our involvement in WWII – the pet massacre is one of those events that problematizes these myths.

Are you willing to open up about your current project? How does it compare or contrast in style, tone, etc., to Goblin? How near completion?

HellSans is a sci-fi thriller with lashings of body horror (I’ve been describing it as my “Hollywood action movie by way of Cronenberg”). HellSans is a ubiquitous font; when exposed to it, most people experience contentment, but a minority are allergic. The HellSans allergy sufferers (HSAs) are persecuted and live in poverty in a ghetto on the edge of the capital city. The main characters are Jane and Icho, who are caught up in government machinations.

HellSans has a similar energy to Goblin and some similar themes – the human/animal relationship theme is still there, but more in the background. I touched on disability and difference in Goblin and I brought this to the forefront in HellSans – one of my protagonists is disabled and she’s actively involved in shaping the world. We need more disabled protagonists.

I’m currently working on the second draft of HellSans – I was fortunate to receive Open Project Funding from Creative Scotland to complete it.

What lessons did the writing of Goblin teach you about writing and bringing a project to completion? Anything you’re doing differently for your current work in progress, based on what you learned?

Writing the first draft was a struggle – I had a low tolerance for the imperfections of a first draft and I was very slow. I worried at every turn – Would I be able to capture life in WWII London? Can I adequately get across life in a circus? How do I capture life in Venice? Can I make the two timelines work? Can I hold it all together?

The first draft of my second novel, HellSans, was much easier to write after having completed Goblin, because I’d faced my fear of The Novel. I did research and note-taking, quickly wrote a few scenes as they came to me during the research, then I just got on with it. I didn’t feel overwhelmed by the task – I was excited by it. I didn’t care about the imperfections of the first draft – I just got it down and even enjoyed it.

While I had the structure and core plot points of Goblin mapped out at the beginning, I’ve had to have a much tighter more detailed plan for HellSans because each part needs to fit perfectly into place for it to work.

What’s the biggest risk you’ve taken in your writing, the furthest you’ve ventured outside your comfort zone? Is there a next, perhaps scary, leap you’ve yet to make, a stylistic experiment you’d like to try?

Writing the first draft of HellSans was easier than Goblin, but it still felt like a huge challenge, just in different ways:

HellSans is science fiction, so there was a lot of research into potential future tech, particularly around cyborgs and robotics – the construction of this tech was a challenge and it has profound repercussions within the world I’m building, so it all needs to fit into place.

I also challenged myself in terms of structure – HellSans is in three parts. The order in which you read the first two parts is interchangeable.

If you showed me a photo of the home you grew up in, your personal space within it, would there be books scattered around? Were reading and creativity supported and encouraged in your home?

I was surrounded by books as I grew up; mostly non-fiction – a lot on WWII and the Holocaust. I was brought up in a Christian household so there were many Christian books, including Pilgrim’s Progress, the Narnia books, and of course the Bible itself, which has been a big influence. My own collection of books was precious to me – I remember the excitement of using my pocket money to buy a book in James Thin each month. I loved that experience; it was like finding treasure. The school library (both primary and secondary) was a real treasure trove too.

As a teenager, when I was making the transition from kids’ books to adult books, my sister (who Goblin is dedicated to) gave me 1984, Brave New World, Equus, and The Catcher in The Rye. I’ll be forever grateful for that.

All life experience – the sum total of every life event and person you’ve known – translates into inspiration for a writer, but have there been particular, stand-out experiences you can share that helped form the writer you’ve become? How about literary influences – whose writing moves you?

Reading has formed the writer I am. Fiction, non-fiction, poetry, comics, plays. I devoured everything I could get my hands on when I was a kid, and still do. TV and film were big influences, too.

Are you able to write anywhere you land, or do you require a specific environment? Are you tidy or less structured, need quiet or find energy in life buzzing around?

I prefer to write in my cave (aka my bedroom) with my cat for company, shades half down, headphones in. I sometimes write in silence, but I find music helps focus me, and unlike some authors, I can write to music with lyrics. A large part of Goblin was written and edited to: Clint Mansell’s Stoker score, Nirvana, The Raveonettes, Manic Street Preachers, Goldfrapp, Magazine’s Real Life, and James Dean Bradfield’s The Chamber score (this particular album helped me survive the painful task of hunting for typos).

If I’m in a café or travelling I find it difficult to write prose, but I can read, do research, solve narrative problems, and write screeds of notes.

Edinburgh has literature in its veins, an atmosphere exceptionally supportive of the arts. In what ways has its soul helped develop your craft, and are you active in the local literary scene?

I’m very lucky to live in a city with such a vibrant literary scene. There’s always something going on – salons, spoken word nights, book launches and festivals. I have a chronic illness, which can make it difficult to travel, so having such a great literary scene on my doorstep is amazing.

There’s so many opportunities for writers in Edinburgh. Thanks to Book Week Scotland I had the chance to pitch Goblin to an agent (Jenny Brown) in my favourite indie bookshop, Looking Glass Books. Jenny liked my pitch and took me on after I sent her the Goblin manuscript. Thanks to City of Literature’s Story Shop I had the amazing opportunity to read one of my stories at Edinburgh International Book Festival in 2012.

The Book Festival is the highlight of my year and I practically live in Charlotte Square every August. This year I’m thrilled to be doing an event with Hwang Sok-yong, chaired by Stuart Kelly.