Ryan Van Winkle, The Good Dark (Penned in the Margins, 2015)

This collection’s opening poem, ‘The Duke in Pines’, begins with a structurally straightforward de-clarative: “I woke up with Duke Ellington in Pines.” This apparent simplicity is misleading. Not quite literal, not quite metaphorical, it makes the reader feel as though they understand something, though it is hard to place a finger on exactly what is being understood. To a similar effect, the itali-cised lines, which seem obvious: “I am okay”, “I am doing well”, are borne out of the narrator’s felt obligation to his former lover. The question ‘how “okay” is the narrator?’ is left hanging. The sentiment is by no means false, but there is more happening beneath the surface. Indeed, this sense that people keep an aspect of themselves hidden away, maybe even repressed, runs throughout the book. In ‘You May Not Take Me From The Hills, The Sea’, the speaker finds long searched-for answers “on a high shelf, in the back closet, / with the shoebox gun”. The speaker does not tell us what these answers are; he seems to observe them quietly, then put them back, without confronting anyone about these revelations. 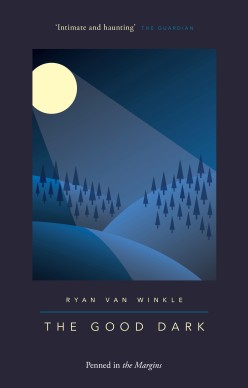 This collection is haunted by more than loss, love, childhood, and mortality, but by that which has been left unsaid and unresolved. In ‘Duke in Pines’, we are introduced to this, when the speaker wants, and implicitly is unable, “to pin him [Duke Ellington] down, write him, / in pines, to you.” These issues of communication are undoubtedly the prime focus of ‘Gerontocracy’, an accomplished poem in which Van Winkle says:

all I ever learned of talking
was from the TV; so loud
it spun out everything honest
so I could not tell what was puppet
and what was shadow.

The subsequent difficulty of knowing how to speak and resolve conflict becomes a persistent theme, even an obsession in ‘A Raincoat, a Spell of Rain Ago’, when it is communicated in the sheer volume of unrelenting, often rhymed, repetition:

No raincoat for the rat-ta-ta,
a raincoat ago. A dog ago.
A hat ago. A love ago. A week ago
there was only no.

At the heart of this obsession, and perhaps also, in a vicious circle, the end-result of it, is the inability to articulate yourself, that there is ‘no voice’. There is arguably a similar obsession in ‘Untitled (Snoopy)’ where sleep is lost over missed opportunities, the “letters / [he] should have written on the hill”. This is the longest poem in the collection, and its very length captures the extent of the speaker’s insomnia. He is constantly thinking of how it is dark. The dark comes to symbolise all of those missed opportunities that keep him awake, but the idea of moving on is simultaneously present:

I knew a boat was waiting,
its dark sails beating
a hoary breath in the night.

The dark, then, The Good Dark, is a limbo, a place between loss and love, life and death. ‘Untitled (Snoopy)’ is the final poem in the collection, and in this meditation on the dark all of the collection’s central themes are encompassed. Van Winkle invites us into the speaker’s house, introduces us to the porch, the futon, and his pet bird, all at night, and night is surely a more private time. This makes the poem that bit more intimate, and so in this long free verse poem it feels as though the speaker has, despite his problems articulating, given absolutely everything. It feels like a long overdue letter to a friend. It is a privileged and moving position in which to be put as a reader.

Ryan Van Winkle’s collection, however, is not without its weaker poems. The Good Dark so brilliantly and so often haunts us with the things half-said and unresolved. But there are poems which make those feelings of loss too explicit, preventing a reader from feeling the same empathy as they would elsewhere. ‘Wait, Listen, If’ strikes me as the most obvious example. Van Winkle is presumably trying to achieve the same simplicity of voice as he does in poems such as ‘Duke In Pines’, but, then, van Winkle’s imagery was far richer, layered, complex. Without those traits, in ‘Wait, Listen, If’, the simple diction falls on flat cliches:

I could have driven you anywhere,
I do not know where we could have gone….

Additionally, the absence, here, of elisions makes it feel like an unnatural attempt at poeticising the language. It sticks out as artificial. Furthermore, the theme of regretting-the-unsaid is made far too obvious in the final line’s ellipsis: “for me to say—”. As well as failing to embed the poem’s themes as effectively as in previous poems, he uses some of the most overused ‘poetic’ devices, with second person imperatives: “test / the brakes…”, “Leave the fools…”, and the epistolary opening: “If you are reading this”. The poem lacks authenticity in terms of its formal approach, and its themes are made too obvious; we are told what to feel, as opposed to feeling it, as we feel so strongly elsewhere in the collection. This poem marks the beginning of an aimless section in the collection; it is followed by two dream-poems, ‘Window Not Sky’ and ‘Untitled’, then by ‘I Look Up Again’. The latter poem is about looking at the moon, and as that and the title indicate, the poem begins and opens with cliches, which sadly eclipse a vibrant middle-section, packed with imagery and anapaestic rhythms, that might have seen the collection return to its full-strength.

Van Winkle’s poetry does return to its subtler, better self in ‘The Day Our Desks Grew’, a poem which circles back to childhood, a frequent theme of the collection. The poem starts from a place of ambiguity: “I saw it coming when the lights shot on and my friend / went home”. The impersonal pronoun, the monosyllabic rhythm, fast and strong, lend the opening a dynamism, and a threatening sense of mystery. Change is being thrust upon the speaker, but there is no immediate way to understand what that change is. Then the image of water, teeming with “tadpoles and little insects” which walk upon it, juxtaposed to the knowledge that “the lake was over”, to the images of “pencils and books”, and to the prospect of school tomorrow, show us that an idyllic state, in which the speaker’s childhood has been spent, cannot be returned to. This poem is more than one of child-hood nostalgia, however; it is about the oppressiveness of being forced into responsibility: “I’d learn to sit straight, cross my fingers / when I lied”, and it is also about the complicity of a parent’s role in that: “Mother / tightened my trousers, slicked my hair”. Isolating what is a formal means of address, ‘Mother’, with a terminal caesura and line-break either side of it, Van Winkle captures that irrational resentment that we can feel towards parents for making us grow-up. And ageing itself is another realisation forced upon the speaker too early: “I saw the desks getting bigger and guessed / I was bigger too”. Indeed, the final lines suggest not only that the speaker will not mourn the place as he will the lake and the creek, not only that his character has been hardened by school, but that his mortality, or sense of it, is now more present:

in a green dumpster, were all the desks that broke.
Soon to be buried. Not one child among us
who would mourn them or quest to their bones.

‘Untitled (Ristovic)’ is an equally beautiful poem. Constantly using the co-ordinating conjunction ‘or’, it twists and turns so that the reader is returned to that state of half-knowing. The biggest question mark that the poem throws up is the ending, whether the traffic lights harken back to the earlier stanza in which the narrator recalls “dreaming of the day a car would forget / to look”, or whether their “twitch / back to green / after a long red” suggests an eventual moving on from that depression. Would the latter interpretation then be negated by the simultaneous arrival of a surprise acquaint-ance, which is nothing more than a dream? These possibilities, individually and collectively, preserve both a sense of promise and one of a devastating loss, express that inbetween-ness. Above all, however, the poem reminds us that the potential significance of what people are going through is boundless. The refrain, which opens the poem, “And it was only a corner”, lets a mundane, everyday place evoke the deepest remembrances. Rather than continuing to suck more poem-juice out of the moon, here Van Winkle’s speaker feels loss so, so genuinely; just by standing on a street corner and looking at some streetlights. That is real, and striking, and a moment that represents the best parts of The Good Dark. And while the collection’s inconsistency is admittedly a problem, I think these better poems are beautiful enough that the book can be remembered for them, and applauded.

← The Strange Case of Thomas Mair
STORIES FROM THE MIND’S EYE: Camilla Grudova’s ‘The Doll’s Alphabet’ →