‘Dukkha’ – a complex Buddhist concept of the suffering that is inherent in life – is the poem that opens this collection.

Shelter is the only really necessary thing. 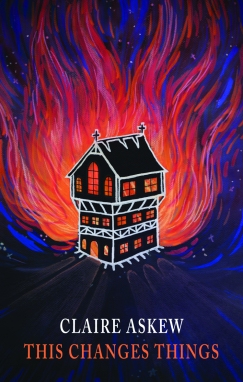 Every creature has its burrow,
bolt hole, cave, its fist of twigs.
Just make it safe, a place
above the flood plain: shake
its sticks and slates to test
it can withstand a storm. That’s all.

‘Dukkha’ goes on to expand the list of needs that accumulate as the human condition inevitably craves more things, and the turning point in the poem reveals the source of the book’s title:

But then your square of soil might spoil
its seeds. You’ll need blades, some kind
of beast to slug them through the mud
in rows. You’ll need to feed it
from your grain: this changes things.

It introduces us to an idea that runs through this collection, and is implied in one of the interpretations of dukkha, that suffering comes from clinging to ideas of permanence. This book is divided into two sections. The first lacks any kind of permanence. It features marginalised characters, girls who are desperate to grow up, a teenager who is soon to leave a dead-end town, old-age, death itself, a poltergeistrix. And it ends in fire – the ultimate destroyer of permanence.

Askew’s touchstones are two strong female role models introduced early on in the collection. One is a non-conformist grandmother (‘I’m sorry I’m still in love with my grandmother’) who appears to have been disapproved of by others but whom the narrator clearly adored. She is remembered in a second poem that catalogues her sayings which are familiar yet surprising, and funny when presented as a list on the page. The litany remembers one woman but is likely to bring to mind others for the reader. A second inspiration is Anne Askew, a 17th century writer who was branded a witch and consequently tortured and burnt at the stake; she happens to share Askew’s name. She is recalled in ‘Anne Askew’s ashes’, which introduces the theme of fire to this collection:

The places Askew describes in the first section are places you’d want to leave: a school with its nest of bullying, a dead-end hometown, and Wakefield – a place that is embodied here as a “dirty bitch”, one that sucks up all the misogynist bile laid upon it. ‘To Wakefield’ acknowledges in the epigraph Jenny Lindsay’s poem ‘Edinburgh’ which inspired it. Lindsay’s poem is an affectionate and humorous portrait of a flawed, lesser known Edinburgh beneath the picture-postcard image. Askew captures her portrait down a back alley, personifying Wakefield as drunken and promiscuous:

Wakefield, the ultimate lousy lay
mutton-dressed catastrophe, shoving your hands
down the jeans of strangers in doorways…

and ends it with a punchy last couplet:

I told you I loved you.
You punched my lights out and fucked my Dad.

Another poet referenced in the first section is Carol Ann Duffy – here Askew writes her own version of Duffy’s ‘Valentine’ which explores the metaphoric possibilities of an onion as a surprising love gift. Askew uses the metaphor in a more sexually explicit way and adds an underlying threatening tension:

I’m slipping you this sticky fist
to see you spent
and breathless with delicious tears.

Carol Ann Duffy’s modern feminist mythologies and her tightly paced narration could be seen as a poetic influence in other poems throughout this book.

This is a collection that is very aware of the poet’s voice and the poem’s perspective. Women on the margins of society (economically disadvantaged, those lacking a voice or power) are introduced to us as real lives, with a deliberate effort to dismantle any thoughts of stereotyping or pity we may harbour. Through fierce observation and empathy for the subject, the point of view is always close to that of the women being written. But perspective is also addressed directly in ‘Privilege 101’ and by writing it in the second person this poem challenges the reader to consider their own. This poem foreshadows the second section where the perspective moves to one of increasing privilege – one that can buy a house, travel the world. Here we observe other outsiders: a beggar, a street-seller. Our assumptions are regularly challenged: ‘The picture in your mind when you speak of whores’ lists all the stereotypes that have been used in association with prostitution and reminds us at the end that we should assume nothing.

Elsewhere ‘Rescue industry’ addresses male privilege whilst acknowledging the narrator’s subjective position. This brings us onto the feminist standpoint of this work; the women being addressed, observed and vocalised are all active, strong characters. From the girls dealing out the pain in school, the sister urging a younger sibling to leave town, the woman finding what she needs in skips, a ‘Witch’ making a living by begging, to the woman watching all she owns go up in smoke and saying she “wants none of it”, these are women suffering the pain of dukkha but getting on with it. These are unconventional homemakers, inhabiting the places in-between, despite the dangers that ‘The lucky little girls’ unwittingly avoid, and ‘The western night’ perpetuates – cinematic clichés of collective fear – that serve to restrict women’s access to the very spaces the poet explores.

Fire is a theme that we are introduced to early on, that then recurs in poems featuring cremations, including an unsentimental elegy to a grandfather who was an aeroplane mechanic during the war. ‘Spitfire’ smuggles the theme into its title too, containing the life and death associated with the machines. Section one ends fittingly with ‘Fire comes’, in which a fire consumes a house and all contained within. The awful scene unfolds slowly, like an undressing, and is told in the third person from the fire’s perspective.

Fire comes to the garden like a sordid thought, brought by a hand
starfishing out
to ditch a Silk Cut filter still alight. It can’t believe its luck: a smudge
of creosote
spilled up a wall, a windless night… Fire slides its tongue into the house’s
ear.

Every second line is short, leaving a long breath that brings oxygen into the poem, fuelling the fire. There is a sense of a cycle here; there is death and destruction but out of the ashes comes life. In this way Askew’s voice echoes the old time storyteller and the modern world is an old world. What she has to say is brilliant and compelling, much like a fire. The cover of the book (Nick Askew’s ‘Fire comes’, 2014) depicts a phoenix-like image, a house is burning down, all is lost. But if you look closely the house is untouched, it is already rebuilt; it is the hearth where we sit and tell stories, recite poetry, recall the dead.

Askew’s apprenticeship, we’re told on the book cover, has been in the spoken word scene. If, like me, you’ve not been fortunate enough to catch one of her performances don’t worry — there is a beautifully crafted cadence in these poems, and each one immediately walks and talks in your head with its own voice and rhythmical meter. Subtle internal rhyme schemes carry you along without artifice, mostly using assonance or half rhymes embedded in the middle or near the end of lines. When I started reading this collection I would have said that Askew was most comfortable when building a poem from stanzas of 6-10 lines to sketch character and place. However I soon had to concede that she is equally skilled in other forms. A seemingly simple imagist poem, ‘Seefew steading’ is a good example: with spare language it works like the opening scene of a film, cleverly containing the whole film and an unmistakeable atmosphere within one frame. Despite this being a collection built up over many years there is no obvious developmental trajectory, no poems that could be labelled early poems; these are hard hitters, bold and polished to a steely gleam.

The second section of the book opens with ‘The axe of the house’ a sequence in five parts in which a house is being renovated but the ghosts of the past are still present. The central image of an axe is observed in the last part standing in a block of wood in the shed, a quiet reminder of the possibility of destruction. And indeed, in the life of an unremarkable street, the threats to a comfortable existence seem ever-present. Askew is always reminding herself, and us, never to get too comfortable; it could all be lost at any time. Although the themes from the first section of the book carry over into the second, there is a distinct change. Place, and its effects, are regarded with a detached gaze,be it a watchful neighbour or traveller’s perspective moving through America and Europe. We, the reader, are never really allowed to settle down. But this is no hardship; Askew’s characters and places come alive on the page, revealed to us in unflinching detail. She is able to make the grit sparkle and the words singe. The travelling poems have a sparser language, leaving space on the page to breathe, reflecting their contemplation. A couple of poems feel distanced, not as engaged with their subject, e.g. ‘Barcelona diptych’ and ‘Highway; Skagit County, WA’. However here also are close-up poems capturing moments of desire and love. Two poems at the end of the book feature light. The first, ‘Bad moon’ deals in moonlight. It reminds us again not to fall for clichés:

The moon must be sick of being in poems –
always gripped by fingers of late honeysuckle,
always filtered in the lake through the jetty’s slats

After the second stanza it turns, and we find that moonlight is as likely to illuminate a pig-farm or a crime scene as it is a romantic scene. Askew manages to achieve this without preaching. The other light is the bright white Mediterranean light that dazzles us at the end of the collection. ‘Hydra’ is the final poem. I read it from the viewpoint of the many-headed monster, its multiple eyes viewing a Greek island, everything saturated in light, as the line endings emphasise:

Everywhere you look is light
so exquisite it hurts. Light
off the taffeta sea, the brief white
rips of wake and surf; light
…
that’s one hundred percent proof. White-
washed island carefully dressed in light

Early on in the book, the narrator of ‘High School’, a bullied school girl, describes herself as monstrous. At the end the narrator seems to inhabit the monster, but it is at peace with itself, and focuses on the positive, the beautiful. The poem eventually reveals itself to be written from, or changes its perspective to, that of the writer:

this is the life. Mine is the lightest, easiest life

It is a fitting ending to a book which gives us multiple shifting perspectives, as if those of a many-headed creature. At the end the writer has found her place in the world and is settling down to write. This is our gain. With this collection, Askew has firmly established herself as a strong, unique voice; she was a runner-up in the 2014 Edwin Morgan Poetry Award and has been shortlisted again for 2016. It is clear she has a bright future and This Changes Things will undoubtedly bring home more prizes.