ON THE EDGE: HEAD FOR THE EDGE, KEEP WALKING

Head For the Edge, Keep Walking published by Cargo, is the first novel by Glasgow writer Kate Tough, who is also a poet and short story writer. It is a contemporary novel set in present day Glasgow and tells the story of Jill Beech, a thirty-something woman, who is recovering from the break up of a long term relationship.

At first glance, this novel deals with the familiar themes of relationships and babies that most women are either thinking about or being urged to think about by the media, their families, random strangers on buses, people at parties and dates that they meet on the internet. These themes are consistent throughout the novel. At an early stage Jill scrolls through her mobile to find someone who is free to go out, later she feels alone at a party where everyone is in a couple, and in a particularly funny scene at a bus stop where Jill imagines the conversation that the drunk man next to her is going to start up based on many previous such encounters:

[A] Conversation that he will apologise for starting but will proceed on regardless. Conversation that will quickly move on to the realms of the personal. ‘yur a lovely lassie. So y’ur. Where’s your husband the night hen?’… passers by will hear me say ‘’I’M NOT MARRIED,’ and he will reply. ‘Lovely lassie lik’ you.’ Courtin’ then aye? Boyfriend, then 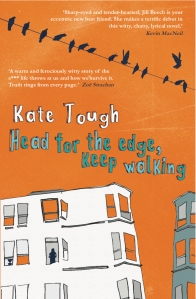 Female readers between the ages of sixteen and forty-five will be nodding with recognition throughout this novel. If you’ve ever got on a bus alone, or gone to a wedding without a partner or opened a newspaper you will be familiar with the fact that nowadays women’s fertility choices (or even lack of choices) have become fair game for random strangers and politicians alike. You’ll have been told that you’re too fussy or not fussy enough, that you’ve left it too late or had children too early, that you’ve made bad choices in your partner, that you shouldn’t wait for the perfect –person. You’ll be asked if you’d ever thought about having children alone and if you have, asked if you think it’s fair to the child. If you’re with a partner you’ll be told that you’ll be next and if you have children you’ll be commiserated with for having lost your freedom and for how hard it all is. Whatever you do, you’ll be wrong.

Jill has a friend in most categories, a married one with children who would like some time to herself, another who becomes pregnant at the beginning of the relationship and one who has winter boyfriends and who is considering baby shopping–or maybe sperm shopping–in European holiday destinations. Jill herself is unsure if she wants children at all and after an operation to remove cervical cancer cells, unsure too if she will ever be able to have them. She feels that she has squandered prime fertility years in a nine year relationship that failed and now won’t get that chance again. “I let him go at an age when no one else will want me. I was reckless with my best years.”

Although there are dates and flirtations and one night stands and obsession over children, this is really a novel about long term friendship, including all of its irritations and petty jealousies as well as the bigger stuff such as helping out with a premature baby and support with break–ups and cancer. Jill has the sort of friends who will fall out with her for not sending a text in time and then come round to her house at three in the morning to cheer her up if she needs it, friends that are sympathetic, but only to a point.

What is interesting here is that although there are so many areas of recognition in this novel, these themes are rarely explored in contemporary literature. As we marry later, if at all, divorce, change partners, move away from families for jobs and study, friendship can be the most important relationship that many of us have. Yet it is rarely explored in literature about women.

The novel is a quiet one and covers everyday things in an average life, bad internet dates, rubbish jobs, foolish bosses, squabbles with parents and boring bus journeys. These are sparsely described and frequently caustic. “I get up, I go to work, I spend the whole day there.” These few words perfectly conjure up the dreariness of a dull job when nothing else is happening.

Jill tries to pick herself up and goes out to a concert alone and out dancing with a friend and she tries to become more ambitious at work and to tie in her job with her own personal ethics. She also begins internet dating and meets a man that she might like or at least one who will save her from loneliness. He seems to be desperate for children himself though and that brings her back to the original dilemma of her own fertility and whether she even wants them. Not long after she finds out that her best friend has had a premature baby who might die and we go back to the real question of the novel which is not ‘‘Will she get a man?’ but ‘Will she keep her friends?’ as her depression starts to irritate them and they become caught up in their own challenges.

The whole of this novel is written in first-person present, a voice from which writers are often discouraged because of how difficult it is to achieve successfully, but this is done so well that the style is invisible and serves to make the reader feel that they are right inside Jill’s head, ruminating over her decisions, sharing her concerns and getting frustrated with her obsessions. Jill is an extremely believable character, dry, intelligent, kind, self-absorbed at times, worried about how her choices in the past will impact on her future, worried about whether she is doing her job well or she even wants to do it at all.

Despite its topics this is a very funny book. There is always humour in the despair as well as despair in the humour. One of my favourite moments takes place after a hospital visit for a cervical examination that Jill is, at that stage, keeping quiet from her friends; she goes for a drink with one of them and her obsession with both her and other’s fertility quickly intrudes.

“I’m worried about the vagina.”

“Excuse me? What’s wrong with your vagina?”…

I don’t know yet I’ll find out in about a week or so.

“Nothing,” I say, “except maybe underuse, I’m worried about the vagina.”

“I’m worried about you,” says Hilary.

“It occurs to me that even in this day and age there is a campaign against the vagina and women are colluding in it…Erin’s sister had a baby,” I tell her, by Caesarean.

“Oh lovely! What did she have?”

“A boy. Girl. I don’t know. Anyway she did it by Caesarean. What is the obsession with Caesarean deliveries if not a mass by-pass of the vagina.”

Will Jill find love, get pregnant and live happily ever after, will she lose her friends? You’ll have to read it to find out. And you should.