LYRIC MEDIUMS: Kate Bush’s ‘How To Be Invisible’

In her lyrics to ‘The Sensual World’, Kate Bush draws inspiration from Molly Bloom, the ‘Penelope’ figure and ‘mountain flower’ whose orgasm concludes James Joyce’s modernist epic, Ulysses. She sings: ‘how we’d wished to live in the sensual world / You don’t need words – just one kiss, then another’. In which case, what is the purpose of How To Be Invisible, a book of Bush’s words, without the added ‘sensual world’ of her music?

The video for ‘The Sensual World’ features Bush dancing through a forest of drifting seeds (or maybe embers), meeting fire, night, glitter and hail, letting her hair down as she goes. One answer to this question might be that, as a creator, she has always moved fluidly between mediums. Her music has vibrant theatrical dimensions: in the video for ‘Wuthering Heights’, her dancing, with its exaggerated, mime-like gestures, responds to the extremity of Emily Brontë’s original novel, and mimics some of its moods. As David Mitchell notes in his introduction to this collection, she is fond of ‘masks and costumes – lyrically and literally – and of yarns, fabulations and atypical narrative viewpoints’. In an interview with Owen Myers, Bush commented on her school-age interest in becoming a psychiatrist: ‘I suppose if you’re in any form a writer, which in a sort of way a songwriter is, then I think it’s sort of a natural thing to feel intrigued by.’ Her songs are accordingly full of other minds, characters and alter-egos, and she has always taken inspiration from literature. Her association with Emily Brontë’s work is so ingrained that in 2018, she was commissioned to write a poem set in stone near the Brontës’ home in Haworth. 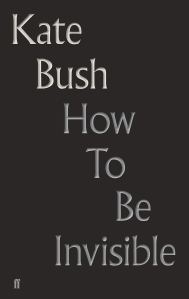 One of the major pleasures of this collection is seeing lyrics from throughout her career rearranged, plotting resonances and conversations between them. She is often climbing or going uphill, ‘Up on the angel’s shoulders’, as she sings in ‘Top of the City’. Amy Key comments: ‘it hadn’t struck me how many of Kate’s songs seek the isolation […] and splendour […] of a high vantage point.’ How To Be Invisible opens at the pinnacle of this theme, with ‘Snowflake’ starting inside a cloud. At first, the song seems to inhabit the voice of a falling ice-crystal, calling out to another one floating beneath it; however, as the lyrics progress, this voice also evokes swans with long white necks, and the snow becomes a metaphor for lost spirits. As well as fairy tales like Hans Christian Andersen’s The Snow Queen, this again reminds me of James Joyce, whose short story ‘The Dead’, a narrative of lost love and nostalgia, concludes with snow falling, a softly equalising force between living and ghostly worlds. For Bush, the sky often represents dissolving boundaries, possibility, and romantic flight: in ‘Running Up That Hill (A Deal With God)’, the song’s central couple try to reach higher ground in order to find mutual understanding, an emotional weathering: ‘There is thunder in our hearts’.

However, dissolved boundaries can also summon horror, dysfunction and abuse. Bush is interested in emotional extremes, including frightening and destructive desires, and places ‘The Infant Kiss’ and ‘Misty’ alongside each other in this collection. Both of these songs are singularly disturbing. ‘The Infant Kiss’, inspired by the 1961 horror film The Innocents and the uncanny children in Henry James’ The Turn of the Screw, describes a woman sexually attracted to a young boy, thinking that he is possessed by a grown man:

His little hand is on my heart

He’s got me where it hurts me

Knock, knock, who’s there in this baby?

In ‘Misty’, a woman creates a living snowman, and, like a female Frankenstein, is unnerved by what she has made: ‘My hand is bleeding, I run back inside’. The snowman becomes a cold romantic partner, like a reanimated dead lover, passively angry: ‘He won’t speak to me / His crooked mouth is full of dead leaves’. She tries to warm him, and, by morning, he melts away in her arms. It’s still snowing outside, so she tries to reunite with Misty, creating a role-reversal of Heathcliff and Cathy in ‘Wuthering Heights’ – ‘I’m coming out on the ledge’ – much as ‘The Infant’s Kiss’ inverts the themes of ‘The Man with the Child in His Eyes’.

As the collection progresses, Bush moves from air to water, featuring a selection of lyrics from The Ninth Wave. ‘And Dream of Sheep’ describes someone lost and drowning at sea. Originally released on Hounds of Love (1985), it’s impossible to read the lyrics now without thinking of the migrant and refugee crisis, however far that was from Bush’s original intent: the video accompanying its later, live release features Bush floating in a life vest in dark water, waiting for either rescue or death. It’s a poignant and beautiful song.

When reading a book of lyrics, curiosity prompts me to cross-reference the printed words with their vocal, oral and visual adaptations, as well as real-world conflicts that speak to them, the song becoming a three-dimensional landscape, constantly evolving. The title of this collection, How To Be Invisible, suggests to me that Bush’s songs offer a liberating dissolution of self as much as (or more than) a concrete realisation of self, a spirited ether created by her distinctively high, turbulent vocals. I generally think of song as a more embodied medium than print, but Bush’s lyrics make this seem an over-simplified way of thinking about the recorded voice, which is, after all, invisible, whereas print is always marked: one of the pleasures of this book is its visual layout, which sometimes makes the lyrics ‘dance’ across the page in swirling fonts. Bush’s songs play out between embodied and disembodied states, seeming to speak with the voice of the dying (as in ‘Moments of Pleasure’) or those already dead. She makes me think of Dante’s Paolo and Francesca, the ghostly lovers trapped in restless air, to such an extent that I’m surprised she hasn’t yet themed a song around them.

If the air is where Bush’s songs long to be, water often prompts grief. In ‘Mrs Bartolozzi’, a woman watches her partner’s clothes swishing inside hers in the washing machine, and imagines she’s standing in an overwhelming ocean, with a mixture of humour and unplaceable sadness. Bush sees spirits everywhere, even in an empty shirt drying on the washing line, and she carefully places this lyric beside the swirling winds and necromancy of ‘Wuthering Heights’. Her biggest hits are equalised alongside less well-known lyrics, such as ‘Waking the Witch’, which recreates a witch trial in a cacophony of voices, finishing ‘Get out of the waves / Get out of the water’.

To me, How To Be Invisible therefore confirms that Bush is, as well as a genius songwriter, one of the most prominent writers of contemporary British ghost stories (or ghost lyrics?). In the final song, ‘Lake Tahoe’, she brings the collection full circle: a dead woman rises out of a mountain lake, to search for her lost dog, who is called Snowflake. This reunion feels earthly, despite its ethereal themes: they meet between air and water, the dog resting his head on the woman’s lap, as if the hounds of love have finally come back to her.