READS OF THE YEAR 2018: Stephanie Green

Luck is the Hook by Imtiaz Dharker (Bloodaxe, 2018) is my stand-out book of poetry this year. Lyrical with a compassionate humanity, Dharker’s poems have a piercing, deceptive simplicity of image and language, particularly the poems about the loss of her husband and her bereavement.

The most haunting poems are indeed about hauntings – of a step-well (found in Asia – do Google!) where ghosts of the drowned caress living visitors; not just ethereal, the ghosts have a physicality too: ‘the scent of desire, the stench of loss’. In another poem, snow suggests bereavement, the loss more poignant for the restraint:  ‘…cold as the space you leave behind…’ This associative thought trail leads to poems about the hauntings of language: ‘Words are nothing// but gravestones unless they haunt/ your day and night.’

The step-well poems are echoed by poems about the descent into Hades by Persephone. And using the same associative technique, the personal poems open out into a series of political or historical poems such as her commission to commemorate St Paul’s Cathedral during the Blitz. A poem about the cathedral-sized hole in Essex where a bomb which fell was safely exploded leads onto a poem about the explosive effect of language. Other historical and geographical associations with St Paul’s focus on the Thames, a big freeze in the 17th century, and the wonder of the elephant who walked on the ice.

The ferocious wit of her previous books is more muted, but the sadness of this book is leavened with a gentle humour. She describes herself as ‘a Muslim Calvinist, brought up in a Lahori household in Glasgow, adopted by India and married into Wales’ and this mixed heritage is celebrated with humour in ‘Chaudhri Sher Mubarik looks at the loch’ where her grandfather’s loves declaiming the word ‘loch’ ‘like a true-born Scot’ ‘with an och not an ock’ because he can also say ‘khush and khwab and khamosh’.

Her poems have great musicality, written for the ear as much as the page. A striking performer, it is particularly pleasurable to hear her read. A talented artist, her repetition of concepts or images in new contexts weaving throughout the book is a technique echoed in the black and white drawings illustrating the book, their delicacy and simplicity of tonal patterns evoking the essence of each poem’s theme. An exquisite, deeply moving collection. 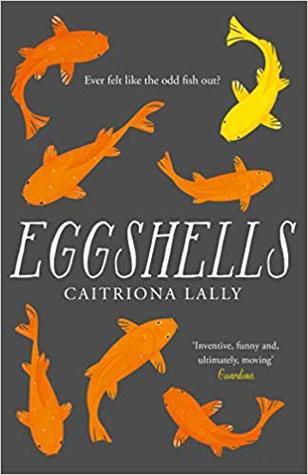 Eggshells by Catriona Lally (The Borough Press, 2018) is a hard-to-pin-down and ‘unputdownable’ novel, despite being at times irritating with its endless lists – which I confess I often skimmed. It’s both quirkily funny and unsettling in a way which got under my skin, it being obvious that all is not well with the first-person narrator, Vivian, an adult locked in a strange semi-childlike but affectless state. VIV (as she prefers to be known as it’s a palindrome and in caps, so it’s shouted) spends her days walking round Dublin. Like another Irish writer (JJ of course) she is obsessed with language but unlike him, she thinks she is a changeling and is looking for a portal (a kiosk, a grating, a well) to enter another world, a ‘thin place’, either to escape this world or to go home. She is looking for patterns, codes, or hidden anagrams that might be magic spells, but this is not mere folkloric whimsy. Rather, like Mark Haddon’s The Curious Incident of the Dog in the Night-time, there are hints that she is autistic, better at engaging with objects than people, (‘I can’t decide which chair to sit on. They’re all facing me with their hands up, hissing “Teacher, teacher, pick me”). She notes the shape of letters of the alphabet (‘Upper-case letters have pointed edges and size on their side, but their lower-case rivals are bendy with attitude.’) and the sounds of words, writing down in her notebook the weird result when street names have been ‘blued out’ (i.e. lost some letters) and each day tracing on greaseproof paper a map of her walk and finding a comparison: ‘Today I walked a slice of batch loaf with an aerial poking out.’ Colours have a life of their own, such as the blue of the postman like a needle threading in and out of front gardens, and she decides to eat only blue things one day. Aware she doesn’t know how to talk to people she makes a list of topics and adds words or sounds she’s heard other people use, like ‘huh’ but in the wrong context. Her attempts to engage with others is heart-breaking; Vivian brushes off yet another rejection and carries on. No one does anything to help, including her sister and neighbours. Only her ‘friend’ Penelope, who seems to be equally unusual, is unjudgmental, agreeing to strange tasks such as digging a hole in Viv’s back garden so Viv can be buried standing up. Funny with an underlying sadness, there’s a devastating hint of her backstory revealed only at the end of the book.

A Hurry of English by Mary Jean Chan (ignitionpress, 2018) is a poetry pamphlet and I can’t wait to sing her praises now though I know her full collection is to be published by Faber & Faber in 2019. Originally from Hong Kong, she now teaches at Oxford Brookes University. Her poetry is taut, intellectual but with heart – a rare combination. Her queer awakening led to her first writing in her second language, knowing her mother could not read English. The difficulties she’s faced with given her family’s non-acceptance of her partner and also the experience of being a migrant negotiating two cultures, lead to poems ‘tuned to two frequencies.’ Her outstanding poem ‘//’ explores the many meanings and symbolism of chopsticks, including same-sex relationships: ‘My mother lays the table with chopsticks and ceramic/spoons, expects you to fail at dinner’ and then swerves into a passionate evocation of kissing her lover. It’s no surprise this many-layered poem was shortlisted for the Forward Prize for Best Single Poem, 2017.