MARK RUSSELL‘s first full collection is Spearmint & Rescue (Pindrop Press). He has also published Shopping for Punks (Hesterglock), a full collection of experimental work. His chapbooks are ℵ (the book of moose) (Kattywompus), ا (the book of seals), and Saturday Morning Pictures (both with Red Ceilings). His poetry has been published in The Rialto, Tears in the Fence, The Interpreter’s House, Bare Fiction and elsewhere. https://markrussellat.wordpress.com/, @mark59russell

The night Sandy died I decided to go for a walk
down the track and then across the road to the pier.
It had been raining for days and the slipway was submerged.
I could make it a little way out in my wellies,
a tolerable impression of a man walking on water.

The night was still and quiet. The A82 paused for breath.
The waves seemed to sing a little song of everything.
The moon was big and bright against the black sky,
singular, silver-white, like the only light in the house
had been left on, and everyone was home. 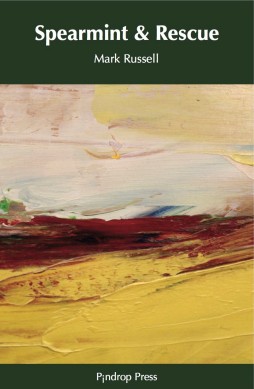 A song can draw you a map of your school playground
And mark an X where you first got punched on the nose
A song can bring back your dead
For about two and a half minutes
Which is an appropriate amount of time
A song can lance boils, both real and figurative
A song will pay for an all-inclusive holiday to Hawaii
But not the island trips and hookahs
A song will compile lists
And accompany you to social rituals
Especially the ones you hate
A song can get you roaring drunk
And a song can sober you up
You can strangle a song of course
But that will cause you more pain than the song
A song can sense when you have made a mistake
It can pass on blame to others
Or it can stand up to declare your guilt
Your song is the one who assumes your burdens
And sings you to the river

On the radio this morning I heard the Shadow Chancellor
say that pensioners are being chased
by the Actual Chancellor, so I phoned my mum.

She said she was sure that it wasn’t him chasing her,
though she wouldn’t recognise him even if he was
because she doesn’t watch the news, it’s depressing,

and anyway, all politicians are the same
and she’d rather watch Coronation Street
and old re-runs of Inspector Morse.

She said in her younger days she wouldn’t have minded
being chased by Rock Hudson, and she didn’t believe
all those stories about him being you-know-what,

nor the furore surrounding all the nice men
who keep getting put in jail for how’s-your-father.
They can’t all be guilty, can they, and the girls,

they’re just after money, aren’t they?
I said mum, where did you learn the word ‘furore’?
She said she read it in the Daily Express

and that if I was going to rubbish her paper again
then I could just go and live in Russia.
I said mum, you said you didn’t think it was ‘him’—

does that mean somebody else is chasing you?
Oh yes, she said. There are loads of people chasing me.
They want my money, but they’ll not be getting it.

← MATERIALITY IN AND AFTER DEATH: ‘Bella mia’ by Donatella di Pietrantonio, trans. Franca Scurti Simpson
SAILING WITHOUT AHAB: AN ECO-POETIC VOYAGE – PART ONE →