READS OF THE YEAR 2016: Samuel Tongue 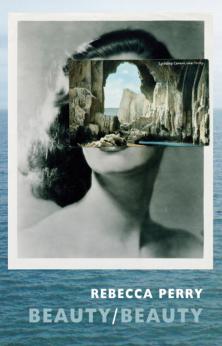 Rebecca Perry was invited to read (along with Helen Mort) as part of the St Mungo’s Mirrorball poetry events at Aye Write this year. Both are accomplished and exciting poets, in performance as well as on the page. Perry’s reading prompted me to search out her debut collection.

Perry’s Beauty/Beauty is split into seven sections, each with an enigmatic title, e.g., ‘When a dog goes to heaven the stars are green’ or ‘I am cargo’. The first section is titled ‘The human heart is curved like a road’, a line from the poem ‘A Prayer for the Wild Heart Kept in Cages’. This poem exemplifies Perry’s tender conversational style, intimacies into which we are invited. Logic proceeds through interlinked or juxtaposed images and the poet’s voice is often pointedly self-reflexive:

The paragons of frankness are shouting again.
This time. Life is an unanswered question!
and now we shout back
But let’s still believe in the dignity and importance of the question!

The philosophical emphases of the collection explore the multi-layered and overlaid beauty/beauty of the everyday, such as in ‘Dear Stegosaurus’; here a skeleton, millions of years old, impinges on the present:

Your spikes are dull and magnificent,

a row of abandoned kites, rusted by a tough winter,
in a tree stripped of guts. You’re not a fighter, though

Perry is unafraid of the long meandering line and she manages to hold everything in place with an endearing familiarity and tone. Occasionally, a poem is constructed from a scene, or series of images, that cannot bear the weight the piece is intending to convey but the cover image (Mask xxxv by John Stezaker) demonstrates how Beauty/Beauty is a collection of intricately overlaid poems, one image over another, one addressee beholding something very different from another, one idea over another.

Many poems utilise space as punctuation, both margins of text justified, the words themselves placed intentionally so as to speed up or slow the reader down through a kind of visualised idiom. ‘Over/Wintering’ even includes the slashes normally used to indicate line-breaks within the line, e.g.:

The effect is to show those layers and strata of thought from which the poem is constructed but also, in Perry’s surefooted manner, to perform the white space which renders black type legible and beautiful in its own typographical aesthetic.

Perry’s writing is open, never didactic, and I enjoyed the collection immensely, not only because of the myriad stylistic flourishes but particularly through Perry’s emotional intimacy, inviting us to muse, with the poet, on the idiosyncrasies and mutability of our lives. Nothing is finished.

World as a kind of half-finished sentence.
World as a blank night in January.
from ‘A Most Satisfactory Dreamlife’ 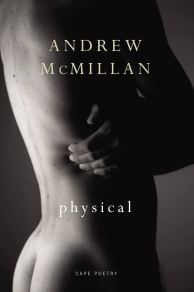 Having seen McMillan read at StAnza in March, I was very pleased that he was also invited to the Aye Write festival by St Mungo’s Mirrorball and performed again from Physical, this time alongside David Kinloch. The first poetry collection to win The Guardian First Book Award, Physical explores and explodes many pervasive myths of masculinity and homosexuality, turning the male gaze toward the fragilities and performativities of the male body.

As I wrote my doctoral thesis on how (and why) contemporary poets have rewritten and retold the biblical story of the patriarch Jacob wrestling with the stranger/angel (David Kinloch featuring as one of those very poets), I was struck that McMillan opens his own collection with yet another recycling of the canonical scene, playing off the ambiguity and implied violence of the wrestling bout where we (almost) view the protagonists,

As Jacob observes in the last line of the poem, “writing something down / keeps it alive” and this theme pervades the entire collection as McMillan records the encounters and intimacies that are marked on his and others’ bodies.

In poems such as ‘Urination’ and ‘The Men are Weeping at the Gym’, McMillan takes us into the hyper-masculine spaces of toilet and changing room to show us the absurdities and pathos of the pretences performed therein:

The strange sociologies and codings of the men’s urinal takes centre-stage and are, for want of a better word, exposed. McMillan renders them perfectly and poignantly.

The central sequence is McMillan’s long poem ‘protest of the physical’ (originally published as a Red Squirrel pamphlet). This is a lot looser in its stitching than the rest of the poems and McMillan eschews any punctuation in order to get closer to more natural speech patterns. This works very well, especially in live performance:

Physical was shortlisted and won a plethora of awards and deservedly so. But more than this, McMillan’s poems demonstrate the essential textures that construct the male body and the desiring gaze cast upon it. At both events, audience members asked questions about how McMillan is able to write in such a bare ‘confessional’ voice. I suggest that McMillan is much more subtle than this; his poetry is written in a performative, fictive, mode, and is all the more persuasive and satisfying for it.

Of course, I like to mix some fiction into my poetry reading. This year, I finally read Tom McCarthy’s Remainder (Vintage, 2007), one of the best novels I’ve read in a while. As with the poetry I’ve selected above, I’m always impressed with writing that is able to stay close to mundane details that become charged with potency by their inclusion. The protagonist’s obsession with repeating such details as distant piano music, the smell and sound of liver frying in a downstairs room, lethargic cats lounging on roofs (until they fall off), takes on much more sinister overtones as the novel progresses. And yet, in the very act of writing (and reading) there is a yearning for the power to be able to engage such ‘re-enactions’, to continually return to certain events and situations and wring them for meaning. For the unnamed narrator, the hunt for experiential authenticity spurs on ever more elaborate re-enactments, working out the dark logic of unlimited control, bereft of any ethical safety-catch. Terrifying and perhaps even more pertinent as we head into the seemingly inevitable shocks and downright nastiness of the politics and rhetoric of the so-called ‘alt-right’, at home and abroad, in 2017. How will we flip the safety-catches on such re-enactments?