READS OF THE YEAR 2015: Rebecca DeWald

Timothy Egan, The Good Rain: Across Time and Terrain in the Pacific Northwest (Vintage, 1990)

In 2015, I was lucky enough to be able to embark on a road trip, beginning in Vancouver and travelling across to the San Juan Islands and then on to Seattle, heading down the Oregon coast via Portland to California. I limited myself to buying one book per destination, and it had to be a book by a local author or a writer with local relevance (e.g. Berkeley-born Ursula K. Le Guin, who has been living in Portland since 1959, classified as “Oregonian”, though the expanse of Powell’s City of Books additionally made a two-book margin extension necessary here. Oops.) I picked up Timothy Egan’s The Good Rain in Seattle, mainly because the classic had been sold out everywhere we went previously.

This literary non-fiction is an account of Egan’s travels through his home, the Pacific Northwest, whereby he muses over the past of the places he visits, historical events and regularly crosses roads travelled by explorers Theodore Winthrop (recounted in his semi-biographical novel The Canoe and the Saddle, 1862), as well as the Lewis and Clark Expedition, the first to cross the Western Frontier in 1805. Egan explains how towns and mountains got their names, vividly describes the very British heritage and atmosphere of Victoria, B.C., and the Communist witch hunts under McCarthy in small towns. He denounces the American settlers’ past that continues (in 1990) through the treatment of native Americans, the environment and of salmon. Egan’s book is more than a travel diary: it is a political statement that often left me speechless at the cruelty greed and superiority can trigger, both in relation to other human beings and the environment. The salmon – omnipresent in the Pacific Northwest – is indeed the somewhat uniting figure for past and present changes in the area: the development of the area and buildings such as the Grand Coulee Dam have put hurdles in the way of the coho or the bright-red sockeye salmon and their spawning grounds and thereby contributed to the oppression of Native Americans reliant on salmon for their livelihood.

The Columbia [river] carries so much water to the Pacific that the salmon sense some dilution three hundred miles from the river mouth. After picking up the hint, they start to make the left turn home. Ten thousand years or more of Indian prayers have been directed at the left turn.

And it is salmon who, perfectly placed in the food chain between oceans, rivers and land, acts as the first and best indicator of the state of the environment. In recounting his travels and musings, Egan always finds a poetic tone that goes much deeper than a matter-of-fact account and lingers with the reader. A book I found myself thinking about on a regular basis in 2015.

Naomi Klein, resident of British Columbia, also notes salmon as an indicator or possible role model for life during, with and potentially after climate change. The book, a “cheery” Christmas present in 2014, took me the best part of a year to read because the thorough and often depressing analysis of the reasons why climate change has not sunk in properly is often difficult to come to terms with – and, as journalistic pieces go, it is full of facts and details. It might be because I am a reader who, while finding them fascinating, struggles with historical details, that I found the latter half of This Changes Everything easier to grasp, where Klein links the issue and dangers of climate change with her own pregnancy. [1] Besides all the signs pointing to climate change we already see and experience (rising sea levels, extreme weather, etc.), Klein notes a revelation in relation with her fertility which stuck with me in particular: If the world will come to an end, it is most likely not because of a great apocalypse in the form of a nuclear disaster or an alien invasion; it will be because of a lack of offspring, because of the general infertility of nature caused by natural and human disaster. And the second discovery that we tend to think of the Earth as this blue planet we know from photographs from space [2], ergo as a planet we can manipulate and maybe need to protect, when what we actually need to do is protect ourselves since Earth gets on just fine without us.

In all these revelations, while I still think it is the most relevant book of 2015, I felt let down by Klein’s possible solutions: grass-roots activism, with the aim of creating friction in the system in order to keep fossil fuels in the ground, and being the “moral voice” in a selfish neoliberal system do not seem quite enough to persuade countries like India, China or Saudi Arabia to stick to the Paris Agreement in keeping emissions below 1.5°C and report back to all other countries every five years, while there are no concrete interim goals or sanctions in case of non-action. [3] Nevertheless, I cherish the hope that Paris has marked a change in attitude and that movements like 350.org grow beyond grassroots dimensions to become mainstream convictions. 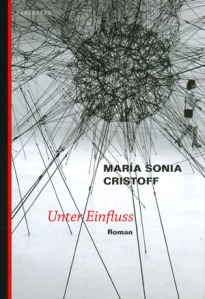 2015 seems to have been the year when I finally caught up with previous Christmas presents (though there are still some casting a reproachful eye on me from my bookshelf). Unter Einfluss [literally Under the Influence] was one such book I have been wanting to read for quite some time, especially since I have not come across many female Argentine writers in English translation for my Argentine Travelogue; so the Patagonian novelist in German translation made for an interesting addition. The novel is a satire on the art market but also plays on the dark Argentine past with its many disappeared citizens. A young woman, Tonia, disappears in Buenos Aires. Her mother and her best friend try to find out what happened. What sounds like a crime novel turns into a study of relationships between women. The best friend, also the narrator at times, investigates Tonia’s flat and starts reading her notebooks in which she recounts meeting the young performance artist Cecilio, who only comes to being an artist through Tonia’s influence (he would rather spend his days striding aimlessly yet determinedly through the streets of Buenos Aires). The narration alternates between the girlfriend, who is angry at the realization that the two women had drifted apart long before one of them disappeared, and Tonia, who feels progressively more used and abused by Cecilio and the art market. The notebooks ultimately do not answer where Tonia went, and what has come between the women, though the uncanny feeling remains that, besides adopting Tonia’s dog, her friend has taken on her entire life. What particularly struck me about this book, however, is its unusual prose: it is sharp, quick and direct, much like Tonia and Cecilio’s fast walks through the Argentine capital. Kultzen is extraordinarily creative in his word choice, invents terms and finds cultural equivalents in German which highlight the universal validity of the topics discussed and show that alienation between long-term friends and the curiosity of the art-world are international subjects.

[1] See an excerpt from This Changes Everything on The Guardian, 13 September 2014.

[3] See a summary of the Paris Agreement at the European Commission’s site and the full document including analysis over at the New York Times.