“THIS PIECE OF EARTH”: SCOTIA NOVA: POEMS FOR THE EARLY DAYS OF A BETTER NATION

by A C Clarke

I had better declare my hand at the start. Tessa Ransford is a friend of long-standing and over a third of the poets included in this collection are friends or acquaintances. Not unusual in the small world of poetry, and I hope it will not compromise the objectivity of the review, but I feel it right to mention it.

The editors and publisher of this anthology, whose subtitle clearly indicates its purport, set themselves a brief at once dauntingly wide and restrictingly narrow: wide in that contributors were asked to respond to the idea of “a better Scotland,” by implication “across every aspect of life”; narrow in that the authors approached — not all primarily known as poets — were in the main those published by Luath and the process of calling for submissions was only three months long from start to deadline.

Since the submission period was well before the date of the referendum the contributors and publisher were committing to an unknown future, an act of some courage. That the poems chosen have as much resonance post-referendum as they had when submitted, and that the anthology does not read like a compendium of failed hopes is a tribute both to the contributors and the judgement of the editors.

The anthology opens with Angus Calder’s paean to incomers, ‘Talking to Mario Relich about Gulls in Edinburgh’, with its pigeons and gulls “flying upwards towards the sun,” which of course is not, as he pretends, merely about birds: the idea of modern Scotland as “a place for all of us to dance and sing” (John Purser’s phrase in ‘Michael Marra’) recurs directly and indirectly in some of the strongest poems.

Nowhere is it given more cogent expression than in Nalini Paul’s ‘Surge’, “That monochrome way / of seeing is gone” and Donald Adamson’s ‘Landfall’, “Everything came from somewhere else.” Both poems draw their strength of feeling from a deep love of the Scottish landscape, and it seems to me that the truest and purest strain of national pride is voiced in the many poems in the anthology which engage with the landscape – “this piece of earth / whose cities, lochs and moors / inhabit us” (‘Landfall’). In Jim Aitken’s ‘Kirkaig Falls’ the waterfall becomes a living being – “in him runs the blood / Of the country which bred him,” while in George Gunn’s ‘Wound’ the people of Scotland themselves become landscape – “we are time & headland & will heal.” 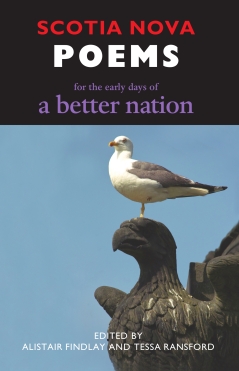 Linked to this love of landscape is a sense of its former inhabitants and mythologies. In Gerda Stevenson’s beautiful poem, ‘Head of a Young Woman’, the poet comes face to face with a Viking woman reconstructed from her skull in Shetland Museum and wants to “walk with [her] the cliffs of Silwick,” to learn what gave her “her fearless gaze of hope” – contemplation of the past segueing into vision of the future, a pattern followed too in Harry Giles’s ‘Maeshowe’ where the “gabbin, / lowsin shaddaes” of the dead buried there proclaim in the end “Nae faith but in time.” In Donald Smith’s ‘Alba’ the deft use of refrain ties the failed promise of “a land fit [for heroes]” made to returning soldiers from World War One to the renewed promise of such a land now, leaving the implications of the link for the reader to deduce.

Poems such as these express the hopes and fears of their authors in an imaginative and nuanced way. Less successful as poems, in my view, are some of those which show their hand more openly. I don’t subscribe to the view that poetry should not be used as a vehicle for political statements – where would half of Shelley’s work be then, or MacDiarmid’s? There is, for me, only one “should” in poetry: that a poem should explore its theme using the unique resources of poetry for suggestion, counterpoint, visual imagery, linguistic inventiveness, musicality, etc.; in other words, be a poem and not something that might have been presented as well or better as an essay or a broadside.

Vigorous use of the vernacular, and strong rhythm can carry the reader along on a tide of language, persuading not through the logic of argument, but through the sense of rightness to the ear, as in Rab Wilson’s rousing sonnet ‘Veesion’, which sees the cross on the ballot paper as “Yer ain crux decussata, market ‘howp’” or Alastair Findlay’s fiery ‘Lenin Ponders Voting Yes’, which has the revolutionary leader applauding “this gallus, raucle nation” from the grave. I defy any reader, of whatever political persuasion, not to fall in tune with David Betteridge’s metrically exact and beautifully phrased ‘Citizen’s Song’, with its hymn-like close: “we are our land’s harvest, gathered / and golden, / and, each day, the risen bread.”

It is easy, though, when writing from passionate conviction, to lose sight of the poem as a whole and it is a pity that a number of otherwise effective poems in the anthology stumble when sentiments, admirable in themselves, are phrased in language so flat that it jars with the context (see my italics in each quotation). The reader is brought up short by “no wind can blow an organised people / across the unknowable ocean” (‘Wound’), “Ower lang oor caws for equality and social justice / hae fallen on deif and distant lugs” (‘Auld Reikie’), “the day we press red button of dispatch / each one of us within the polling booth” (‘The Rising of the Kelpies’). The preface tells us that “All the poems have been written or adapted for this anthology save the opening one by Angus Calder.” I can’t help wondering if the lack of a final polish to some poems reflects the shortness of time allowed for submissions.

On the other hand a looming deadline can concentrate the mind wonderfully and take it in unexpected directions. The poems which have most engaged me in this anthology have often come at the theme sideways, conveying a strong sense of the poet’s individuality. I would say too that they have expressed most clearly the spirit of Michael Knowles’ image for the front cover of a seagull standing on the head of an eagle at the base of Henry Dundas’ statue in St Andrews Square, Edinburgh. The editors see this as the visual portrayal of “something quite different emerging” from the old Scotland into the new, but to me it is cheekily irreverent, joyously subversive, like ‘On Top’, Pamela Beasant’s plea to mainland Scotland not to forget its islands, the “wee hats” which “might one day / blow clean away” or ‘A Wee Word of Advice from the Empire,’ Ken Cockburn’s wonderfully apt parallel between Roman and British imperial rule  (“Listen. You worship / who you like BUT / the Emperor’s a god”).

In a similarly left-field approach, Alan Gay chooses to imagine the dawn of a new era being celebrated by the universe “Dressed to kill in velvet lit with sequins” (‘The Universe Celebrates the New Dawn’), Stuart A. Paterson sees it as colouring “the sunrise blue” (’19-8-14′), while in his subtle poem ‘Choinneach at the Peats’, one I returned to several times, Morgan Downie explores the question both of cultural differences and independence of spirit through the meeting of a native Gael and an incomer.

Equally engaging are Anne B. Murray’s alphabetical praise poem ‘Scotland, My Scotland’ in which “Islands and Inlets” jostle with “Italian Ice-cream, Irn-Bru”’ and Angus Reid’s acrostic poem ‘look! – a successful Scottish colony’, in which the common harebell offers an alternative “Example / of Scottishness” to the failed attempt to colonise Darien. Poems like this embody the dream “o a future / abuin […] the drums duntit, tubs thumpit”.

That last line of Douglas Adamson’s ‘In Thir Haunds’ encapsulates the generous and optimistic spirit of the collection as a whole. So many poems end in affirmation: “Gaun, Margo! Gaun!” (Alastair Findlay, ‘The West Lothian Question Answered’); “noo’s the oor tae grab haud of the nettle” (Barry Fowler, ‘Sonnet 18914’); “how long/before another dawn like this will come? / It will come” (Alan Riach, ‘The Argument’). Wisely, the editors have balanced the strongly pro-independence thrust of the majority of poems with others expressing caution or doubt like Aonghas MacNeacail’s ‘Latha Samraidh/A Summer Day’ (“no promise / that clouds won’t return / before propagation shapes / what we’d wish to grow”) and Donald Adamson’s ‘In Thir Haunds’ (“Wha’s like us? folk blaw / But ah ask masell: Wha’ll dae better than us?”). Harry Giles’ entertaining ‘A Questionnaire for Citizens of an Independent Scotland’ slips in the telling question “Can you let bygones be bygones?”

Hugh Macmillan’s ‘Auchencairn, and Scotland, as it Should Be’ manages to have its cake and eat it as only a Hugh Macmillan poem can and brings the collection to a fitting close. He imagines, tongue in cheek, an ideal Scotland in which June is “the start of a brilliant summer,” the air of Galloway “is rich in love and brandy and revolution,” and it’s even “mathematically possible […] for Burns to come in / and put the icing on the cake.” In this heady atmosphere, the “I” of the poem decides not to speak of, among other things, “my hidden fear that in an independent Scotland / my pension might suffer,” effortlessly revealing the small-mindedness of that thought without recourse to any “tub-thumping” at all.

I have mentioned the opening and closing poems of the collection and it is clear that their position has been carefully chosen. The other poems are simply arranged in two sections, each in alphabetical order. No-one is represented by more than two poems and the second section contains the author’s second poem, where there is one. I imagine that constraints of time and perhaps a desire not to privilege one view over another dictated this arrangement. It can lead to illuminating pairings, such as Douglas Adamson’s ‘Landfall’ and Ken Cockburn’s ‘Orkney’ side by side, complementary reminders of previous invasions of Scotland. Equally it can lead to quite jarring contrasts, as when a reader passes immediately from Des Dillon’s dolefully prescient sonnet Celtic disaggregation (“On the count our nerve failed”) to Colin Donati’s bravura Henryson pastiche Thir Meters Yit are Current Quha Will Leuk to Morgan Downie’s restrained and eloquently phrased celebration of landscape In the Wind Country. The heterogeneous nature of the anthology — a common feature of anthologies — is highlighted, perhaps unnecessarily, by this arrangement. It may be better to dip in and out than read through in linear fashion.

In the preface the editors explain that they hoped the submissions sent to the anthology would “meet the diversity and inclusiveness that its theme envisaged.” The anthology admirably fulfils the aim of diversity as regards theme, approach, and form. It is pleasing too that not only are all three languages of Scotland – four, if you include Shetlandic – represented here, but also the voices of those born outside Scotland, Nalini Paul, and Iyed Hayatleh, whose poem in Arabic, alongside the English version by Tessa Ransford, ‘To My Homeland’, is a moving love poem both to his recently deceased wife, Lamees, and to the country which welcomed them both as refugees. Despite this, however, even the co-option of some writers from outside the Luath stable has not made the anthology as inclusive as it might be. I would have liked to see, for instance, more of Scotland’s immigrant community represented. I would also have liked to see more women represented. Out of 38 authors only 7 are women (under a fifth). Perhaps writers in these groups were approached and declined to contribute, but it does give rather a lopsided view of the Scottish literary community.

With that caveat, I would say that the editors of Scotia Nova are to be congratulated on providing such a wide-ranging and enjoyable introduction to the possibilities of post-referendum Scotland. As Stuart McHardy’s ‘The Mornin Eftir’ has it “there’ll be nae cries o / misery / jist the creakin soun / o openin doors.” If you open this book you will hear that for yourself.