ARIKA 2013: CONFRONTING US AS FLESH

With ARIKA’s latest series of events the welcome transition from festival-as-celebration to festival-as-potential-interrogation continues to develop. The logical destination seems to be an arts event at which all entertainment and aesthetics (though not enjoyment or representation) are barred. Praise be.

So it may seem strange that this review will focus solely on a single piece which is overtly aesthetic and performative, attempting to subject it to a (necessarily incomplete) immanent critique. It is the defunct nature of the possible analysis which is important here, if, as I suggest, the piece itself acts – as is so often claimed but rarely realized – not as a presentation, explication or mimetic representation of material to be criticised, nor as an offer of a position from which to critique, but as what one ARIKA participant described as “embodied queer coloured critique”. 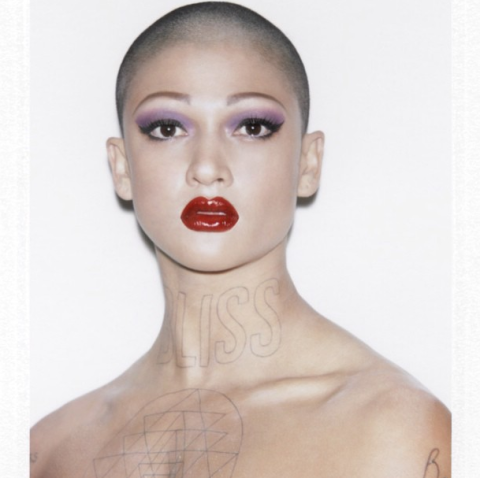 “it is not only on the revolutionary plane that interior life goes bankrupt, it is also on other planes, more individual, less naturally open to exteriority. Why is it that so often interior life cannot be evoked without dragging along the image of large soft flowers, drivel and stomach growling, sweaty palms, white larvae and hints of disrobement … we revile interior life, we no longer understand it except in the form of sweatiness.” [1]

The boychild performances are a monumental and athletic triptych whereby a human body performs a human body. This is not a story or argument, as the performances do not narrate or explain. They are isolated from each other in their recapitulation of the same idea, or argument. They reminded me of the triptych Studies… of Francis Bacon: primordial figures which grin at our biological tragedy. They present our bones, and beyond that our physicality, as alien to our bodies. They are perhaps, as Gilles Deleuze describes, “a trapeze apparatus … upon which the flesh is the acrobat” [2].

In untitled lipsync, a collation of de-feminized parts is recomposed as an avatar to be operated by an alternative logic. This body glitches between states, in and out of existence, simultaneously both a luminous paper thin shell, and an inordinately heavy clay; alternating between flattened image, and inflated volume; string-tied meat and the vitreous panelling of mass-architecture; an automaton created to be silent; an ecstasy muffled.

We are here besieged by video which is body. The lyrics of modern pop – which celebrates the kitsch transcendentalism of love, sex and dancing – are driven to their horrible and logical ends through the decomposition of the physical performance. It asks, what if the grand declarations of our culture were to be taken seriously? What if love is the end, if orgasm is a gunshot, if sex is rape. This is the alternative logic by which the figure is constructed. Nina Simone’s “Sinner Man” – already a terrifying piece of music – is allowed to build cleanly as citation before fissures, loops and remixes push it towards breakdown. Rihanna’s “Rude Boy” is is exploded into the single twitch of “love me, love me”. The interior life of emotionality and the bourgeois romantic love that underpins the thematics of even the most unacceptable pop culture figures, is sweated out, threatening to disgorge in a mass of vibration and light. It must always do so, as the self is – rather than being a monad projecting its actions outwards – a projection from the outside constituting a web of events which resolve into a desiring force known as a person. The disgorgement from the body is the return of content of life and the end of form of life: here the abstraction which we perceive as the individual is shown simply as a canvas – a convex cave, a de-gloved volume.

The boychild performance, like the dipping of a swan’s neck or the actions of a car-assembly robot, is a performance without a performer. There are only spectators, who do the work of seeing, the performer dissipates. They work these machines to the bone with no complaints.

In one performance flesh is manifest as lipstick, it ceases to cover, instead it invokes: it is more flesh than flesh is allowed to be. This painting mirrors that in another of the triptych, where the black body is smeared with a black grease in a parody of the phosphorescence of black light. The Figure hangs in the air, discontinuous from the flesh. It is dead, and unbearable. The bones, the articulations, are inscribed into the surface as an alternative articulation, a carapace rather than a human skeleton.The disgorgement of the body from the mouth is achieved by a simple technical means: blue light is held between and behind the teeth in the lower jaw, glowing through the cheek and other fleshy parts of the head. As the body twists above the plinth, judders against the floor, and against walls in an interpretation of human movement, this light produces tracer trails. The ball of light escapes from the body and seems to float detached from the form a few seconds behind.

This is a moment when the banality of the apocalyptic claims of our times (including the negative apocalypse of ‘there is no alternative’) is unmasked as a simple search for authentic bodies. Where the fecundity of the body is halted in order to present itself as an escape from this social abstraction of the figure, it is though decomposition itself has been halted in the face of spectacle. This performance is something astounding, new, uncommoditized – but not resistant to commodification, it is clear how easily these combinations could be reproduced as an advertisement for clothing, cars, perfume. In this aspect there is something desperately romantic about this evocation of the body as an attempt to externalize and translate interior emotionality, where the anonymity of the club scene’s collective emotionality (usually adumbrated with alcohol, amphetamines, MDMA etc.) is provisionally concentrated into a mythical figure. 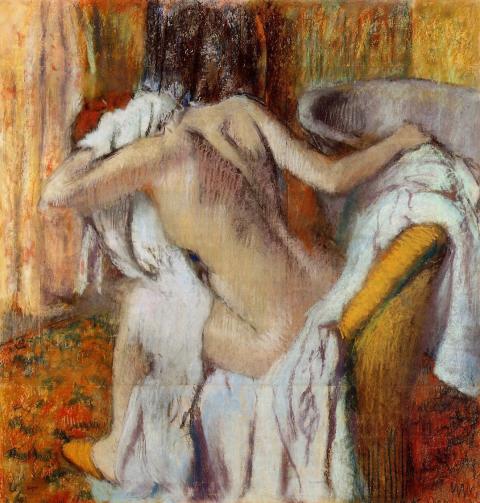 Hilaire-Germain-Edgar Degas – After the Bath, Woman drying herself, about 1890-5.

While the figure of the female body is ubiquitous in our culture, it rarely confronts us openly as flesh. It is presented as an attendant to the commodity, in service of or as an articulation of other values, always as a mediation, even when it is mediating itself. The spectacular figure of the feminine body is the salt to the meat of the female body: here the two are divided in the strobe effect – for one subsecond the figure appears illuminated, for the next the flesh appears, dim but glowering. “The Figure is not simply the isolated body, but also the deformed body that escapes from itself.” p.18 Here the spectacle of the Figure is upset, the social relationship – the performance which produced the female body – is upset also when the flesh intervenes (disfigured by light and more explicitly by string ties) against the Figure as an aggressive attendant, and vice versa. The body attempts and fails to possess its own emanations.

“A joining-together separates the figures and separates the colors – such is light. The Figure-beings separate while falling into the black light. The color-fields separate while falling into the white light. Everything becomes aerial in these triptychs of light; the separation itself is in the air. Time is no longer in the chromatism of bodies; it has become a monochromatic eternity. An immense space-time unites all things, but only by introducing between them the distance of a Sahara, the centuries of an aeon: the triptych and its separated panels.” [4]

In a final gesture towards this sociality – and the dead hand of gender – red lipstick is applied, and the grease hangs on the body as pain is projected outside the accelerated metronome of the strobe. The performance produces fear, arousal, sentimentality. It presents club culture as it would appear from the grave: the audience is silent, uncomfortable, rapt. There is no solidarity among bodies, in this, a sexually indeterminate deconstruction of modern pop and fashion culture within an anti-humanist aesthetic framework.

Beyond this, what? If there is an immanent politics available from this piece, it is not visible, unless it is to suggest that we give ourselves up to the necrotizing forces of culture for which we are already unsatisfactory.

One thought on “ARIKA 2013: CONFRONTING US AS FLESH”