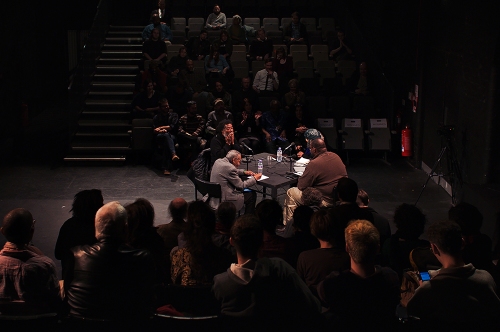 Arika’s Episode 4 took shape on the Saturday afternoon, when Amiri Baraka, Sonia Sanchez, Wadada Leo Smith and Fred Moten sat round a table and spent three hours engaged in a conversation about art and freedom, initiated by the title of the episode, Freedom is a Constant Struggle. They talked about starting Black Studies as a university discipline at San Francisco State University in 1967, about Malcolm X and Martin Luther King, about growing up in a segregated south, about everyday discrimination as a teenager in New York City in the 1950s and 60s, the struggle involved not just in writing but in getting to a place where you can write; as Baraka said, where you’re not gonna let someone tell you that’s not what you people do, or where you resist the notion encapsulated in a remark a grandmotherly teacher made to a teenage Sanchez: “there aren’t any negro writers”. Sanchez spoke about getting visited by the FBI because she taught black literature – writers who now grace most English Literature courses. All four speakers talked about what their kids teach them each day, about Baraka’s son running for mayor of Newark, about Moten’s eight-year-old son not writing between the lines of his exercise book because he didn’t want to give in to the teachers’ “evil schemes”. They talked about American imperialism, about Obama, about why he needs to be critiqued because he presents himself as the apotheosis of a tradition he simultaneously disavows. Moten referred to Smith’s thoughts on the politics of the ensemble, that a solo is never an individual act but afforded and created as part of a collective; Smith talked about the power of art in the instant, the power that changes somebody (not just their mind) in that moment. He talked about teaching a syllabus the university authorities said “don’t have enough white guys in it” and telling those authorities where to go. Sanchez described writing as having “razorblades between my teeth” and hoped to “knock them down with words”. Baraka asked about “adjusting the tradition to madness”, adjusting to a “new madness”. About Cornell ‘Ivy League’ West. Sanchez cried when she described how art allowed to her feel like “I’m home” – “nowhere else” made her feel that way. Moten’s voice seemed to crack too but we weren’t quite able to tell. Baraka checked the privilege of the non-voter. Smith and Baraka talked about blood and about bones. Moten talked of his childhood in a part of Las Vegas that was “a collection of displaced southern towns” with one street a little Arkansas and the next a little Mississippi, about how these communities were reflected in the churches and about a guy called Lester you avoided cause he’d speak bad of you. Sanchez talked about her teenage stutter as self-protection – “if you stutter they won’t touch you”. Lester was protecting himself too, they realised: he could kill you with words. Baraka complained about money, Smith said there’s something money can’t touch. The conversation opened with Sanchez telling a joke about a black airline pilot who goes on the intercom to settle worried flyers, telling them he’s a graduate of Harvard, Yale, Princeton and MIT: “now let me see if I can get this motherfucker off the ground”. It’s that it comes from experience that makes it funny, said Baraka. Richard Pryor was claimed the greatest sociologist of the twentieth century.

This free-wheeling, wide-ranging conversation put the weekend into a context that was at once both historical and visceral, reflective and urgent, and it was a relatively new departure for Arika inasmuch as it more explicitly than before grounded the talks and performances of the weekend in a continuing tradition. It was an approach replicated in Episode 5 – Hidden In Plain Sight, which featured, again on the Saturday afternoon and continuing into Sunday, a discussion between members of New York’s ballroom and voguing scenes. As much as in the performances, both weekends’ cores were to be found in these conversations. If history was visibly important throughout both events, it was as an arena for fights over truth, memory, and justice. At one point in Episode 5, the speakers and the audience collectively summoned, as if in prayer, the memory of Mark Carson, an African-American gay man murdered in a random attack in May: “Mark, we speak your name”. This was important not just to remember – and make present – those who have passed but particularly because the histories of civil rights, LGBT rights, the radical black arts tradition, the ballroom and voguing scenes of New York are ones in which many have suffered and died, often in extremely violent ways, and whose lives have been subject to struggles over meaning and significance. Both weekends’ thrusts, then, came from this powerful need to excavate and create alternative histories that speak to these experiences, to provide, as Arika’s website programme put it, a “historical narrative”. This alone gave a sense of urgency to the weekends but what was particularly inspiring about these events were that these narratives were not provided for us, the audience, in the manner of a lecture or a television history by ‘experts’ and ‘authorities’. That’s not to say that personal experience wasn’t hugely important, nor that the lifelong commitment of people like Baraka, Sanchez and Pony Zion Garçon didn’t give them a natural authority, but rather that we were invited to join those histories through the kind of intense and immersive experiences Arika’s weekends provide. It seemed important that the audience and invited speakers and performers moved throughout the same space for the most part of three or four days; it became a space in which we could all, together, explore the past, present and future. This was most acutely illustrated in the ecstatic congratulatory and revelatory applause at the end of the collective reading of M. NourbeSe Philip’s Zong! in Episode 4, in which the distinction between audience and performer was eradicated not in an antagonistic way (which is often counterproductive, leading to a greater demarcation between the two) but in a glorious communal upspring of joy. No longer resident in paper and ink alone, history came to life and we could grasp it and wrestle with it. As artists Renate Lorenz and Pauline Boudry put it in the introduction to their film Charming for the Revolution in Episode 5: “No to the pastness of the past”.

While there were some interesting contrasts between the two weekends – Episode 4, focused on “the link between radical Black art forms (Free Jazz, Improvisation, Poetry…) and the fugitive spaces that produced them (the AACM, the Black Arts Movement)” had a greater retrospective emphasis than Episode 5, in which many performances staged new understandings of gender and identity – there was for the most part great continuity across the two, partly explained by the original plan for Fred Moten to be present at both. Although that didn’t happen, Moten’s thought bridged the two events in a number of ways. Jimmy Robert’s performance, Supended Closure, Suspended, in which the dancer moved around a taped square on the studio floor, reminded me of Moten’s notion of “the break”. Moten’s notion of “study”, too, was present in both. In Episode 4 he summarised it as “people be thinking about what they be doing”; in The Undercommons: Fugitive Planning and Black Study, his book with Stefano Harney, he describes it like this:

“Is there a way of being intellectual that isn’t social? When I think about the way we use the term ‘study,’ I think we [him and Harney] are committed to the idea that study is what you do with other people. It’s talking and walking around with other people, working, dancing, suffering, some irreducible convergence of all three, held under the name of speculative practice. The notion of a rehearsal – being in a kind of workshop, playing in a band, in a jam session, or old men sitting on a porch, or people working together in a factory – there are these various modes of activity. The point of calling it ‘study’ is to mark that the incessant and irreversible intellectuality of these activities is already present. These activities aren’t ennobled by the fact that we now say, “oh, if you did these things in a certain way, you could be said to be have been studying.” To do these things is to be involved in a kind of common intellectual practice. What’s important is to recognize that that has been the case – because that recognition allows you to access a whole, varied, alternative history of thought.”

With that, I find myself straining at the formalities of the review. Moten’s work is so inspiring it seems po-faced to continue with the disinterested, evaluative language of the critic; rather I feel I should be shouting from the rooftops. One way of dealing with this is to take his study and ask what I’ve learned. I’ve learned that teaching is more important than ever, precisely because it doesn’t only happen in the classroom, and nor should it; it should happen in there and out of there, and should link the inside with the outside, it should spread itself out. I’ve learned that explaining complicated ideas clearly is as important as it is difficult, and those who can do it are to be valued like no others. I’ve learned that places of privilege can also be places of deep impoverishment. And writing now, I realise that across Episodes 4 and 5, we were all, performers and audience alike, engaged in a period of intense study.

I strain at the parameters of the critical review for another reason too. For most of the people I talked to throughout and after the events, the real revelation was the emotional, affective impact the performances and talks had on them. I think this is not unconnected to the greater historical focus, which allowed us to connect theory and life in a way I at least have found difficult before. In this context, the language of the critical review doesn’t seem to register the fullness of the experience. But it raises another problem: much of Arika’s work over the last couple of years has revolved around attempts to escape an individualising, sentimental sense of art and politics as areas of self-actualisation, of personal expression and catharsis. In a sense, then, writing about how these weekends made space for the kind of experience that could be seen in this light might suggest any number of conclusions: that I have gotten the wrong end of the stick; that these Episodes were in some sense ‘failures’ when compared to previous ones; or that they were in fact counters to them. I don’t think any of these conclusions would be quite right, though. Episodes 4 and 5 were noteworthy in part because they dealt directly with the creation of communities through artistic practice, which inevitably involves a certain degree of identity-formation: this is who we are. When Sanchez described the racism and hatred she experienced during her childhood, she was talking about precisely this. If your very existence is point-blank refused, then it becomes a powerful – and necessary – political act to insist on that existence, and one way to do that is through art. These two Episodes were the best thing Arika have done since I’ve been going to their events. They were a culmination of sorts, and the joy of their occurrence is only tempered by the necessary difficulty of the question that follows: what next?

← ARIKA 2013: A CHOREOGRAPHY OF AFFINITIES
PERCEPTION IS ALMOST AN END IN ITSELF: Lyn Hejinian’s The Book of a Thousand Eyes →

One thought on “ARIKA 2013: HISTORY ROUND A TABLE”