Other Worlds Already Exist. If that’s true, where do they exist? Can multiple worlds exist in the same place and time? How do those worlds come into being, and how do we get from one to another?

Art is one of the ways we create and move into those worlds; politics is another. Over the last few years, Arika’s Episodes have developed a thoroughgoing investigation into embodied experience – how human bodies focus “collective desires and struggles,” as Barry Esson, part of Arika, put it in his opening remarks on Thursday night. Although keen to stress their lack of interest in aesthetics, Arika are nonetheless interested in artforms, as testified by the participants in their recent Episodes, which have involved dancers, poets, and musicians as well as academics and activists. These Episodes ask questions about what counts as an artform, and what those forms are for. Arika’s understanding of art casts it as a communal process rather than a rarefied object. In this their Episodes display the influence of Fred Moten (who appeared at Episodes 5 and 6), particularly his notion of “study,” which I remarked on in a previous piece on Arika.

Celebrating and manifesting a notion of intellectual activity as “what you do with other people” is a thread that runs through recent Arika Episodes, and this most recent one was no exception. These Episodes are less concerned with judging a piece of art and more with understanding art as part of the practice of everyday life, and how it might help us open up and make manifest certain possibilities for communal creation.

‘Beyond Transgression’ by Samuel R. Delany at Arika’s Episode 9: Other Worlds Already Exist at Tramway in Glasgow on Sunday 19th November 2017

One of the questions, or refrains, of the weekend, was established early on Saturday. If writing is a way of “making sense of the world,” as Jackie Wang put it, then writing is also a practice that allows one to “have a world to write into,” as Nat Raha added. This temporal relationship – between world and writing, between pre-existence and writing as a kind of performative practice – is at the heart of forms like science-fiction, which allow us not to passively divine the future so much as to create it here and now; to have a vision and then move into it. In his opening remarks, Barry paraphrased an observation from W.H. Auden, that “human beings cannot be anything unless they’ve thought it first.” Of course the question that remains is: how do we cross the distance between here and there, between writing the world that is and writing for the world you want?

Samuel Delany – known to everyone as Chip – was the Episode’s guest of honour, reading and chatting on Thursday, Saturday, and Sunday, and meeting with local Glasgow science-fiction writers on Friday. His reading on Saturday offered a way of thinking about that distance, the tension between this world and the world we want to make. It presented an American South familiar from certain archetypes – working class community, barbeques, road-side bars – but divested of the hetero-masculinity associated with that world. It saw a familiar world differently, and in some ways maybe wrote a world into existence, but more than that it named and described a world that already exists. In this book, Chip was doing what he always does – talking directly. He’s been called a “sexual revolutionary” for the frank way he writes about sex, but that frankness is part of a larger commitment to direct treatment of the matter at hand. That insistence on directness is important, not least because ‘the world’ is as political a notion as any – what gets counted as part of it, and what doesn’t. As he reminded us, the phrase “other worlds” is a metaphor – “we have only one.” To speak indirectly is a form of embarrassment; to speak directly is a form of affirmation. Chip is known as a sci-fi writer, but for him sci-fi is a species of realism. “If it’s not meant to be read as realism, then it’s fantasy,” he said. If sci-fi is “a significant distortion of the present,” then you try to “distort less and less.” 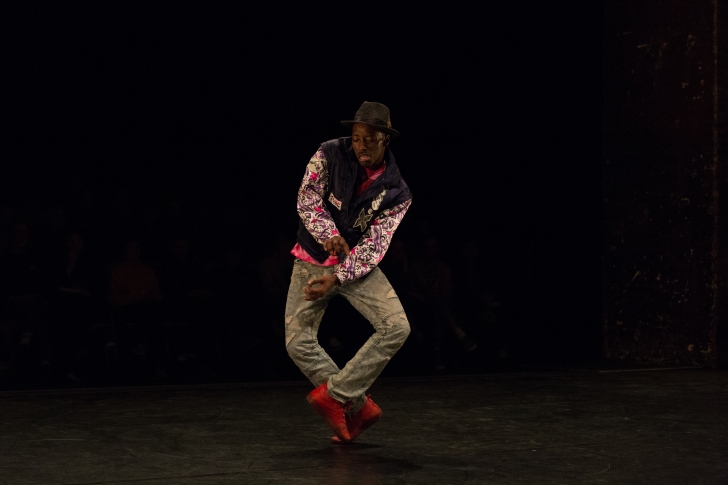 If there is only one world, then it has more dimensions and possibilities than we think. Accessing them is what interests the dancer Storyboard P, who performed on both Thursday night and Saturday night, the latter a beautiful, searching collaboration with members of Glasgow’s Project X, who celebrate and champion dance within the African diaspora in Scotland. This performance was my highlight of the weekend – moving, thoughtful, and full of wonder. It was a mixture of improvised dances to tracks chosen by the four dancers and discussions around those dances – about process, about technique, about effect and affect. Storyboard P described himself as a “shape-shifter in music,” and had a remarkable way of describing how bodies move through space – the way, for instance, dance responds to the presence and absence of other bodies, and how movement reconfigures space in order to accommodate and acknowledge those presences and absences. His speech was as captivating as his dancing. Dismissing choreography as the “infiltration” and “institutionalisation of a language” – a body language – he talked instead about how his dance works in terms of “sitting in a posture and riding it,” how he “stays in a pocket of how I’m feeling.” He talked about being influenced by cinema and time-lapse photography, and Mele Broomes, one of Project X’s dancers, told us how he encourages dancers to think not just about an action, but every broken down component of that action: how an arm moves from vertical to horizontal, how feet move across the ground. This language of pockets and postures, shifting and riding, put me in mind of other moving bodies: the stages of a gymnast’s vault over a horse, tracing out each movement of each limb; surfers riding a wave, an action whose beauty comes from the way it brings to vision the edge between human intention and the oblivion of much larger forces; or birds of prey soaring and gliding on thermals, making wind less invisible, a forceful object. For Storyboard P, dance is a way of accessing the different dimensions of existence that are always present but rarely visible or reachable, of “connecting to your other existence that controls all this,” as he put it. This Saturday night performance was such a moving experience because in seeing those four dancers move, learn, and feel together, we were glimpsing the possibilities of the human body – its capacity to show us, point us towards, a way to live with others. This performance created a world, and moved into it.

One thought on “BODY LANGUAGE”