WILLIAM BONAR was born in Greenock and grew up in the neighbouring shipbuilding town of Port Glasgow. He is a graduate of the universities of Edinburgh and Strathclyde and he gained a distinction on the MLitt in Creative Writing at Glasgow University in 2008. He recently retired after working in education for 30 years and is now a full-time writer. He is a founder member of St Mungo’s Mirrorball, Glasgow’s network of poets and lovers of poetry, and was a participant on Mirrorball’s Clydebuilt mentoring scheme (2009-10) under the tutelage of Liz Lochhead. His sequence, Visiting Winter: A Johannesburg Quintet, originally published in Gutter 06, was chosen for the Scottish Poetry Library’s online anthology Best Scottish Poems of 2012 and he was shortlisted for a Scottish Book Trust New Writers Award in 2015. Offering won the James Kirkup Memorial Poetry Prize for 2014.

The pamphlet, of which these poems form a part, is published on 23rd April and can be purchased from Red Squirrel Press for £6.00 with free postage and packing.

On Hearing of Your Suicide Twenty Years Late

that May morning
naked on the bed

sash open to
sound and sun 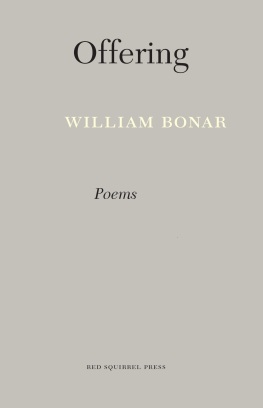 Marrakech was mornings
with official guides
who excused themselves for prayer
and asked
Combien des femmes
avez-vous    monsieur?

in my scriptorium
scraping botched text

I would draw you from behind
standing    arms raised

spine flexed    the cleft curves
of your arse

your tapered elegance
your skin

we walk the towpath
between canal and river

If you wish to read the poems in page view, the following link will take you to a PDF – William Bonar Poems