“Bed, upright chair, sixty-watt bulb, no hook / Behind the door, no room for books or bags — / ‘I’ll take it…” This is how, in “Mr. Bleaney,” Philip Larkin figuratively surrenders, again and unconditionally, to yet another in his own life’s perpetual succession of mild and not-so-mild disappointments. And one cannot help but note the bright alacrity of the surrender: the dispiriting catalogue of dull attributes of Mr. Bleaney’s room succeeded not by a resigned “Oh, alright,” but by a brisk, almost cheerful, “I’ll take it.” Mr. Bleaney is dullness incarnate; the fussy details of his tastes and preferences withering in their banality. Still, Larkin seems to embrace the opportunity to step into his shoes, to lay down on his dismal, single bed and imagine the anodyne tedium of his predecessor’s annual holiday-making in Frinton.

It is no small challenge then for even the most skilled of writers to turn a somewhat fictionalised life of one the likes of Philip Larkin into a clever, comic novel. Few would be equal to it. So here is the good news: Jonathan Tulloch has not just risen to the challenge, he has created, in Larkinland, a work of pure, comic genius that is worthy of its enigmatic subject and, perforce, worthy of one’s undivided reading attention.

Rooted in a finely nuanced and comprehensive familiarity with Larkin’s poetry, Larkinland takes the reader on a journey that begins in Mr. Bleaney’s bleak room and charts from there a partly fictional, partly real, pathway, past many recognisable signposts, through the famous poet’s own life. It is plain that Tulloch has steeped himself in Larkin’s writings the way a doctoral student writing a dissertation on the poet might be expected to do. He has then taken the elements distilled from that reading and combined them with fictive content borne of his own, fertile imaginings to create an exquisitely droll novel.

Those who love Larkin’s poetry love the subtlety of the poet’s sense of humour, thin on the ground though it may be. In Tulloch’s Larkinland, liberties have been taken with humour which will likely offend Larkin purists. As a Larkin devotee, though not a purist, I will say despite an initial wariness I found that I quickly warmed to the clever wit that Tulloch has stitched into fabric made largely from content drawn from the poems themselves. One might liken Larkinland to a well-executed, colourised version of a classic black-and-white film. Some will decline altogether to watch such an abomination, on principle; others will make the effort but be unable to get over their resistance to the tampering and adulteration; and still others will suspend judgment and, after a while, settle in and enjoy the show, including its well-wrought enhancements.

Tulloch’s ear is very finely tuned to Larkin’s voice and the way it is transmuted into the voices of his characters. Figures who appear rendered with a few deft strokes on the page in the poet’s work are developed in Larkinland in ways that are perfectly believable and true to their origins in the poetry. This, I believe, will be acknowledged even by the purists if only they can bring themselves to give this witty novel the chance it deserves.

Of course, Larkinland must ultimately confront the greatest of Larkin’s life disappointments – his failure to bring his long-term relationship with Maeve Brennan to fruition in marriage. In the novel Brennan appears thinly disguised as Niamh O’Leary: intelligent, elusive, strong-willed, sylph-like in her beauty. The incapacitating approach-avoidance conflict that ultimately prevented Larkin from committing himself to her is brought across in this mostly comic novel with great poignancy. In her obituary of Brennan published in The Guardian, Jean Hartley wrote that “…caution, fear of failure, the inevitable loss of his precious writing time and the memory of his parents’ unhappy marriage, stopped him.” Tulloch’s account in Larkinland of Larkin’s lengthy affair with Brennan is perfectly faithful to those truths and, thus, tempers the novel’s humour (and its treatment of Larkin’s own laconic worldview) with a frisson of tenderness and bitter regret, lending it complexity and depth.

In the end, Larkinland is – perhaps unexpectedly – a novel truly to savour. Tulloch’s astute blending of the salty and the sweet in this book captures, in a new way, the curious admixture of boredom, fear of death, contained passion, snobbery, crises of confidence and peerless poetic genius for which Larkin will always be remembered. Purists: suspend your disbelief and give Larkinland a try, I say. If Miss Glendinning—the landlady who lets Mr. Bleaney’s room to Larkin’s ironically named proxy, Mr. Merryweather—hasn’t got you chortling and eating out of her hand in the first thirty pages, then I fear there can be no hope for you. 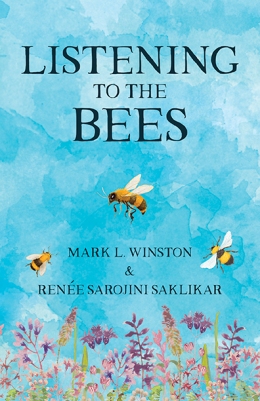 Whatever their ideas about Catholic theology might be, many readers (I expect) will experience a contemplative, epiphanic “aha” moment upon reading this quotation from the 1998 papal encyclical, Fides et Ratio:

Hearts and heads are indeed meant to work together and when they do, knowledge and insights can flow that neither hearts nor heads, functioning independently, can conjure.

In Listening to the Bees, Mark Winston and Renée Sarojini Saklikar have given us a new way of looking at bees – increasingly the bellwethers in our ecologically challenged world – which incorporates the hard rationality of science and the spiritual aestheticism of poetry in a delicate, artful, sui generis blending that is perfectly extraordinary.

The opportunity to see the important place occupied by bees in our natural world refracted through the very different lenses held up by these very talented writers is an opportunity not to be missed. Winston is a distinguished scientist and scholar of world stature on the subject of bees, agriculture, environmental issues, and science policy. Saklikar is a much-celebrated poet, perhaps best known for her work, Children of Air India: Un/authorized Exhibits and Interjections – a poetic rumination on the horrific terrorist bombing of Air India flight 182 in 1985 that claimed 329 lives, including members of Saklikar’s own extended family. Both thus bring fully developed, writerly credentials to the remarkable joint enterprise that is Listening to the Bees.

Almost 60 years ago, in his seminal Rede Lecture, subsequently published as The Two Cultures and the Scientific Revolution, C.P. Snow noted the failure of scientific and literary cultures then to find common ground, lamenting the widening schism that prevented scientists and the literati from greeting one another even with a “frozen smile across the gulf”. Snow saw great, unrealised potential in bringing differently tuned and trained minds together to solve human problems. Alas, the constituencies of the sciences and the literary arts continue, despite Snow’s warnings, to operate largely without regard to one another. Winston and Saklikar, through their efforts, have made a refreshing, encouraging and hopeful break from that unworthy and blinkered habit of mind. Their collaboration has yielded a magical alchemy; the writing of each takes colour from the other, fulfilling Snow’s promise of the inevitable (forgive me) cross-pollination that comes of open-minded, interdisciplinary dialogue.

Listening to the Bees both informs and inspires. The writing is accessible to readers of all inclinations and sensibilities, whether right-brain or left-brain dominant. Its co-authors, each in their separate ways, convey in the book’s pages a robust passion for bees, those complex, intelligent and social creatures that are so important to our survival as a species. Bees provoke, both in Winston and Saklikar (and now their readers), a contagious wonderment and a deep, sometimes mystical, meditation on the creatures’ place, and ours, in the world we share. And while they initially approached their subject from very different perspectives and knowledge bases, these co-authors’ collaboration has yielded an approachable work of great importance that neither could have crafted alone.

We must be thankful for Winston and Saklikar’s beautiful volume; it does indeed lift one to a better-informed and appreciative contemplation of truths about stewardship of our earthly environment that can, one hopes, help point the way forward at a time of great potential peril.